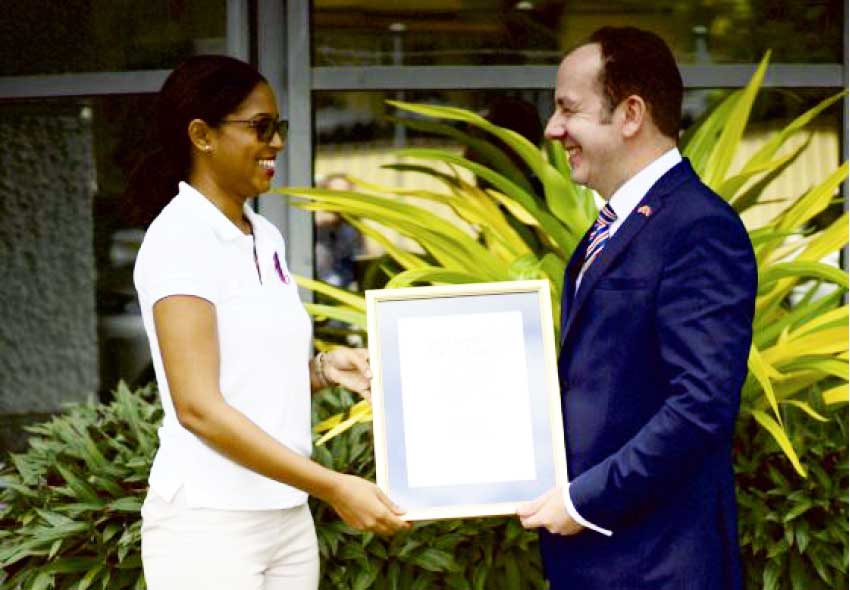 Chelsea Foster is the founder of ‘Girls of A Feather’, a non-profit organisation that aims to empower young women and girls. Since launching the organisation in 2013 when she was just 17 years old, she has encouraged girls aged 10-18 to discuss the issues that affect them most, including gender based violence, economic empowerment, and reproductive health.

During their nine-month placements on her flagship ‘Girls with Goals’ mentoring programme, the girls are paired up with trained mentors who aim to boost their self-esteem. Chelsea also leads projects such as digital skills workshops, recruitment fairs, and tutoring sessions, where the attendee’s accomplishments are celebrated and shared. The St Lucia Government recently named Chelsea ‘Youth of the Year’ for her work supporting disadvantaged girls.

As part of the legacy of the Commonwealth Heads of Government Meeting in London 2018, Her Majesty The Queen – as Head of the Commonwealth – is thanking inspirational volunteers across the 53 Commonwealth nations for the difference they are making in their communities and beyond, by recognising one volunteer from each Commonwealth country each week in the two years following the summit.

By sharing these stories of service, the Commonwealth Points of Light awards celebrate inspirational acts of volunteering across the Commonwealth and help inspire others to make their own contribution to tackling some of the greatest social challenges of our time.

Chelsea Foster said: “I would like to thank Her Majesty The Queen and the British High Commission for recognizing the work and impact that ‘Girls of A Feather’ has had on young women and girls in St. Lucia through our voluntary mentorship programs.

“It is truly an honour to be receiving the Points of Light award on the group’s behalf and for my country.

“The receipt of this award is a major incentive and inspiration to continue creating opportunities for volunteers which allow them to become better advocates on gender issues while helping to shape the lives of marginalized youth in their communities.”

Janet Douglas CMG, UK non-resident High Commissioner to St Lucia said: “I am delighted that Chelsea is being recognised with a Commonwealth Points of Light award for her work in empowering and supporting women and girls.

“The positive effect that her organisation ‘Girls of a Feather’ is having on the lives of young women in St Lucia makes this reward richly deserved.”

The Commonwealth is a diverse community of 53 nations that work together to promote prosperity, democracy and peace.

The Heads of Government meeting brought together leaders from all the 53 Member countries to reaffirm common values, address shared global challenges and agree how to work to create a better future for all citizens, especially young people.

Voluntary service is a vital part of this agenda, which is why Her Majesty The Queen has chosen to recognise outstanding volunteers across the Commonwealth in this special way.