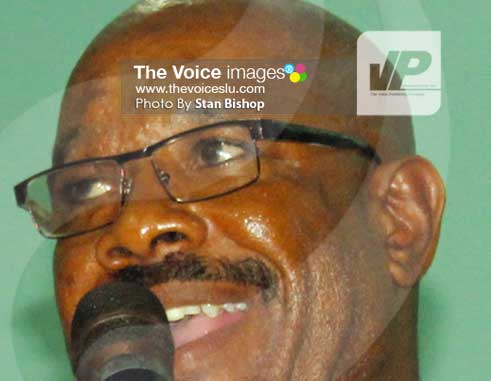 HE’S said it several times on his television show — that he will throw his hat into the ring when the next General Elections come around. Now, following his surprise appearance among the platform speakers at the national protest rally organized by the Labour Party on September 9, Richard Frederick may feel he’s got a stirring endorsement. But is that so?

The response when Richard Frederick was called to the podium to speak, both during the march and at the rally, showed that he is still popular among many in the crowd, never mind his woes with both the Labour and UWP parties.

Now host of a popular weekly TV talk show dedicated to exposing what this current UWP administration would most have preferred to remain secret, Frederick is also still popular in the Castries Central Constituency, which he won handsomely on two occasions, first as an Independent in March 2006 and as a Member of the United Workers Party (UWP) in December 2006.

Frederick’s record in the political arena is undoubtedly one of success, in that he has never loss at the polls. But his popularity also comes alongside many unanswered questions in many minds about his politics, including the reasons hi US visas were withdrawn while he was a Cabinet Minister in a previous administration.

Doubts also linger in some minds as to why despite his value to the UWP, the UWP, under Allen Chastanet, moved to expel Frederick from the party in 2015, ahead of the last general elections, following a public fall-out between the two men.

Never one to remain silent, Frederick has been a steadfast critic of the UWP administration, exposing the government with documentation and other forms of genuine data to substantiate his claims, leading to claims that his exposures reveal the existence of ‘leaks’ in the Public Service somehow represent a threat to foreign investment, if not national security.

Frederick may very well feel that his announcement of his decision to become a candidate in the next general elections may very well be cemented, if the roar of approval that came at last Sunday’s protest march is his yardstick to measure how Saint Lucia feels.

The loquacious learned lawyer told VOICE in an interview the day after the march that while he has decided to be a candidate in the next General Elections, he has yet to decide in which constituency.

“The time is now or never, we have suffered for too long,” he had said during his brief stint on the platform the night before, also calling on ‘The People’ to ‘Save the Country’ by ensuring that Allen Chastanet is removed as prime minister of the country, even hinting at that being a possibility “by Christmas” this year.

In the VOICE interview, Frederick blamed “the Kenny Anthony administration, which had a 16 – 1 mandate in 1997,” for “the type of leadership the country is experiencing today in the person of Allen Chastanet.”

He suggested that “back then, the Anthony administration should have had the foresight to change or tweak the Constitution to prevent the type of leadership experienced today.”

He had also said the night before: “I call on (SLP Leader) Philip J Pierre. I shall support you to become prime minister. I say this without any hesitation. But you [will] owe me this: that our Constitution shall be revisited to prevent what is happening now.”

Without offering details, Frederick said, “Allen is riding our constitution. That must stop. We have to do it very early. If we are not careful, we may even see us having a Chinese prime minister.”

Interestingly, ex-PM Anthony was on the same platform addressed by Frederick on October 9, which is something no one would have expected until it happened. Dr Anthony did not refer to Frederick’s presence at the march or on the same platform as him, even though the two men are not known to share political love when it comes to saint Lucian politics.

But Frederick’s appearance on what his UWP critics have been describing as ‘a Labour Platform’ and his revelation that he has not yet chosen a constituency has naturally led to speculation that he may be planning, wishing or hoping he might be chosen as a Labour Candidate.

SLP Leader Philip J. Pierre lost no time in responding to local media questions about that possibility by pointing out that the Labour Party has an accepted and established procedure for choosing candidates, which will equally apply across the board to anyone interested – Frederick included.

The extent to which current Labour Party leaders will embrace Frederick into the paryy’s ranks is too early to speculate about, but the issue of which constituency he will run is an even more complicated one.

While Frederick has contested and won twice in Castries Central, during the last election campaign he had also shown an interest in contesting the Micoud South seat after it had become clear that Chastanet had worked out an arrangement with (now deceased) Arsene James to succeed his as the next UWP candidate.

Earlier, while a UWP minister, Frederick had also supported the candidacy of his sister, lawyer Lydia Faial, in her bid to challenge Jeannine Compton for the seat, a position that saw the majority in the UWP leadership instead settle for Dr Gale Rigobert. (By then, the late Sir John Compton’s daughter had infuriated the likes of Frederick after making a parliamentary declaration on how she’d spent a controversial Taiwanese donation of funds that went to all successful candidates in the 2007 General Elections. The UWP Founder Leader’s daughter is largely seen as having been hounded out of the party her father built because she enraged those who were not prepared to be as transparent about how they handled their share of the undocumented funds, which, by mutual agreement of the two governments (aiwan and Saint Lucia) did not go through the Consolidated Fund.

Frederick ditched his earlier announced plan to possible face-off against Chastanet in Micoud South after his ground support in Micoud, from which constituency he hails, did not materialize strong enough for his sister against Dr Rigobert.

Interestingly, the Castries Central seat is today represented by Sarah Flood-Beaubrun, who conveniently stood down as a Labour MP on March 13 2006 to create the vacancy and force a bye-election that Frederick won as an Independent, thereafter ditching his green T-shirt on the UWP platform in the presence of Sir John, who had not supported his candidacy on a UWP ticket. That may have been the reason Frederick did not contest the seat in 2016, so as not to appear to bite the hand (Sarah Flood’s) that fed him the seat. But will that consideration still stand whenever the next general election is called?

Frederick can be expected to sit tight on which bandwagon he will ride into the next general elections. But while the wily lawyer, talk show host and wealthy businessman sits on his marbles, the rest of the country continues to wonder what his next move will be – especially where he will run and on which party’s ticket.

Or, will Frederick form his own party? With this Richard, that’s one lion-hearted question that obody else can answer, which means, we’ll most likely just have to wait and see!