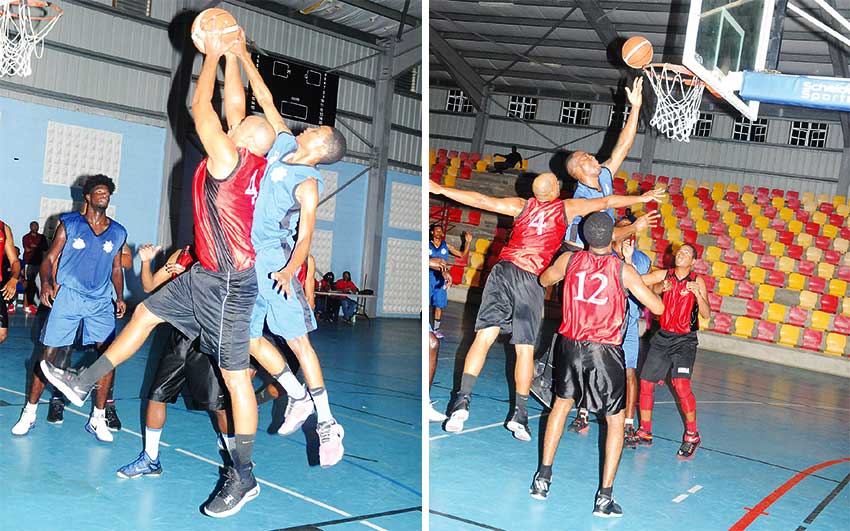 THE excitement continues on centre court amongst supporters from the various commercial houses. On Wednesday 26th September in the 2018 Saint Lucia Basketball Federation/Commercial House Championship, one game is on the card. From 7.00 p.m. Saint Lucia Teachers Union will take on WASCO.

Simeon Hippolyte of Team SLTU was the Saint Lucia Sports Online player of the Game with 25 points 7 rebounds. Simeon and Tristan James were the only members of the team in double figures for the SLTU.

Tristan had 10 points; Nigel Francis of the SLTU had 10 rebounds, 5 steals and 4 assists.

Nye Guard was the top scorer for CSA with 23 points, Ron Edward chipped in with 12 points.

In Game 2, the Royal Saint Lucia Police Force (Combined Forces) defeated Royalton Resorts 81-54. RSLPF outscored Royalton 31 to 12 in the 1st quarter and 16 to 8 in the 2nd, dominating the offense of this game for two quarters straight.

After the half Royalton led the quarter in scoring over the RSLPF team scoring 20 points in the third to RSLPF’s 15 points. The fourth quarter was close in scoring however the deficit from the 1st half was too much to come back from for newcomers Royalton Resorts.

Erwin Tertullien of the RSLPF Combined Forces team was the Super malt player of the Game with 23 points and 13 steals.

For Royalton Resorts in spite of their loss, Kevin Lesporis scored with 20 points with 12 rebounds, 4 assists and 4 blocks and Wenal Alfred had 12 points and 7 rebounds.

On Wednesday 26th, Sandals Blazers took on the Saint Lucia Fire Service, both teams started off the night competitively resulting in a 22-20 first quarter result in favor of the Blazers.

Fire service stepped up their offense in the second half and by halftime had gained the lead 35-30.

Keeping the rhythm and pace of the second quarter, the fire service outscored sandals 26 to 10, having the largest lead of the night 61-40. The sandals team was not going down without a fight and made a few defensive stops and outscoring the fire service 20 to 12 a bit too late and not enough to regain the lead after the 21 point deficit of the third quarter. Final score for the night 73 – 60.

The Flow player of the Game was Gabriel Inglis of Saint Lucia Fire Service Team with 19 points, 7 rebounds and 5 assists. Before going down with an injury Marcian Calderon had chipped in with 8 points, 9 rebounds, Jerry Charles with 13 points and Casson Augustin with 15 points also contributed to their team’s victory.