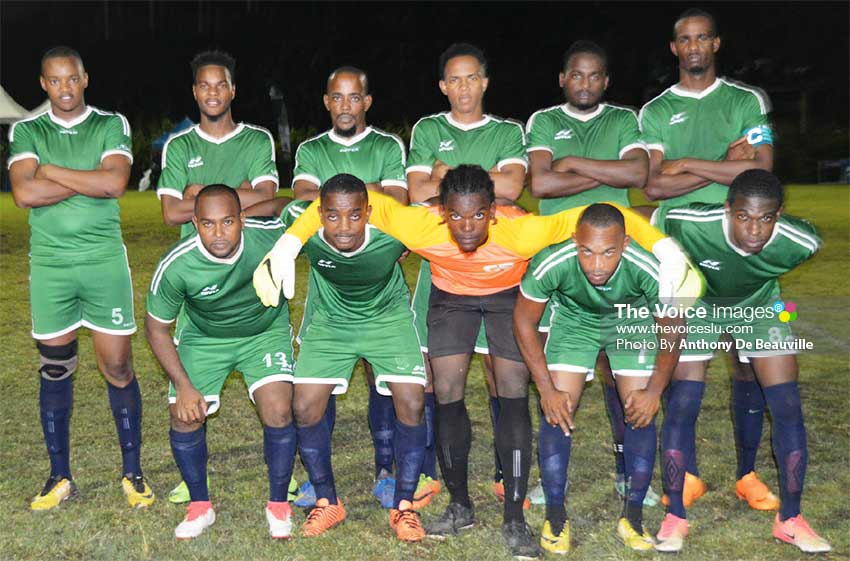 THE Phillip Marcellin Ground in Vieux Fort was alive this past weekend with two double-headers.

In the final preliminary round of matches played on Saturday 22nd, Soufriere and defending champions Vieux Fort South both booked tickets to the quarterfinal stage; while on Sunday 24th, Laborie and Dennery were the first two teams to secure their semifinal berths.

Still bubbling with their win over former champions Canaries in their opening encounter at the La Ressource playing field, Laborie proved to the many critics that it was no fluke as they disposed of Marchand to reach their first semifinal in the Blackheart tournament.

Laborie has been called the underdog and the dark horse in the tournament, but which ever it is, certainly the trick is working for them. Laborie nosed ahead in the 3rd minute of play with an own goal by Tantius St. Ange.

The south western team played the entire half on the counter attack leaving nothing to chance; The Lincoln Phillip led Marchand team only have themselves to blame as they got three chances of scoring in the half, including the captain who squandered one of the easiest chances in his career.

The first half ended 1-0 in favour of Laborie.

On the resumption, the crowd had grown close to 2300. On the square both teams showed urgency, but it would be Marchand with share perseverance when their hard work finally paid off in the 57th minute of play when Lincoln Phillip equalized with a brilliant take from the left hand side. Despite several attempts to goal at either end of the pitch the scoreline remained 1-1 at the end of regulation time.

In the penalty shootout, Laborie won 5-4.

In Game No. 2, dubbed a battle of the “Eastern Titans” Mabouya Valley and Dennery, both teams having won the Blackheart title for a combined six times, 3 apiece.

With a jam- parked PMG, the scores were level (0-0) at the halftime whistle of Referee Andrew Phiilip despite both teams having a number of scoring opportunities.

On the resumption, Dennery shifted into gear as they mounted the pressure with a series of counter attacking football that eventually paid off in the 66th minute of play when Ridel Stanislaus struck from 15 yards out to give Dennery the lead.

With ten minutes there was more salt in the wounds of Mabouya Valley as Wayne Theodule was shown a red card in the 76th minute of play and playing with one man down, MV was still able to make life difficult for Dennery to score any further goals. Final score 1-0 in favour of Dennery.

Dennery will now face Laborie in the first semifinal match next weekend at the PMG.

On Saturday 22nd, in preliminary action, Micoud controlling the game from the first whistle, the scoreline remain 0-0.

On the resumption, Soufriere maintain their counter attack strategy with one striker up front allowing Micoud to have their way, but the style of play from both teams did not trouble the fourth official as the scoreline remained 0-0 after regulation time.

In the penalty shootout Soufriere nosed ahead 4-2.

In the final preliminary match, defending champions Vieux Fort South sent La Clery parking with a 4-0 defeat. The score line was nil all at the half way stage and the pendulum evenly poised at 50-50.

On the resumption, with all to play for in front of their home support, VFS upped the tempo a few notches, but had to wait up until the 60th minute when they were awarded with a penalty by Referee Xavier Louis when Gregson President was fouled in penalty area captain Jamil Joseph made no mistake from the penalty spot as VFS nosed ahead 1-0.

The defending champions further extended their lead, this time No.9 Antonio Joseph during a melee found the back of the nets in the 66th minute, 2-0 the scoreline.

Gregson President made it 3-0 in the 83rd minute of play with a goal similar to Antonio Joseph’s; while Jervik Mc Farlane was finally rewarded for his hard work throughout the match just before he was substituted for Paulsen Joseph and made it 4-0 in the 89th minute.