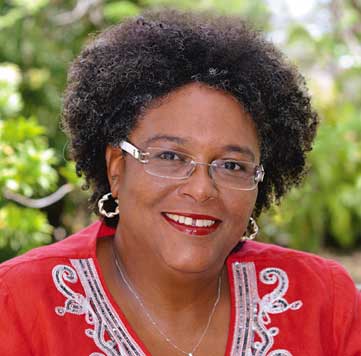 NO exclamation sign can sufficiently underline the sense of achievement when a party wins all the seats in a general election. Congratulations are therefore fully in order for Barbados’ new Prime Minister Mia Mottley, after leading her Barbados Labour Party (BLP) in its devastating 30-0 defeat of former Prime Minister Freundel Stuart and his Democratic Labour Party (DLP) in last week’s poll.

This signal achievement also took place on an island that prides itself as the offshore citadel of English parliamentary democracy.

Clearly, the national mood had swung completely against the DLP. As if its best fortunes had died with Prime Minister David Thompson, his successor completely failed to keep alive the healthy leadership momentum bequeathed by his comparatively charismatic and much-younger predecessor.

The generational gap between Thompson and Stuart was a great divide. No bridge could have linked their characters. Unlike Thompson who never shied from the public, PM Stuart was accused of never having called a press conference.

And then there was the Caribbean Court of Justice (CCJ)… The DLP administration never took kindly to the CCJ having ruled that its immigration officers exceeded their professional boundaries in a landmark case involving a Jamaican national. Likewise, ahead of the election, the Stuart administration fought tooth and nail to resist the CCJ’s eventual order that it register CARICOM nationals in Barbados who qualified to vote. The outgoing PM’s final battle-cry against the CCJ on his party’s platform just hours before the polls opened, therefore sounded more like a Last Post following a Charge of a Light Brigade.

New possibilities are endless in such situations where the Westminster system dictates that after a general election there will be no parliamentary Opposition. The new administration can decide to erase the past and start afresh. Or it can opt to engage in continuity. The victors can choose to further punish the vanquished. Or the winners can remember never to forget that there were — and still are — those Barbadians who voted against the BLP.

The BLP leader’s ceiling-breaking and glass-smashing achievement has set political records in Barbados and the Caribbean. For starters, she and the BLP have joined the list of inductees in the eventual 21st Century CARICOM Elections Hall of Fame, starting with Grenada Prime Minister Dr Keith Mitchell and his New National Party (NNP), which just this past March 13th won all the 15 seats contested – and for the third time.

Saint Vincent and the Grenadines can also lay claim to even earlier membership of that exclusive Caribbean club, its inductee being the late Ebenezer Joshua, who led his PPP in a clean sweep of the polls (during the pre-independence era), following which, in fulfilment of standard parliamentary requirement, the new Premier appointed his elected wife, Ivy Joshua, as Leader of the Opposition.

The new Barbados Prime Minister deserves every note of commendation and the BLP every celebration. But when the partying is over, she and her ruling party and government will inevitably come face-to-face with the inescapable fact that the sweeter the victory, the greater the responsibility.

Every Barbadian can be expected to expect their first woman prime minister to keep-on making them proud.

But at the end of the day, what truly matters is always the preparedness and ability of any new leader and government to not only deliver on the victorious party’s election promises, but even more importantly, to effectively address the major problems inherited — and in ways that will satisfy those who voted for and against, as well as those who didn’t even vote at all.