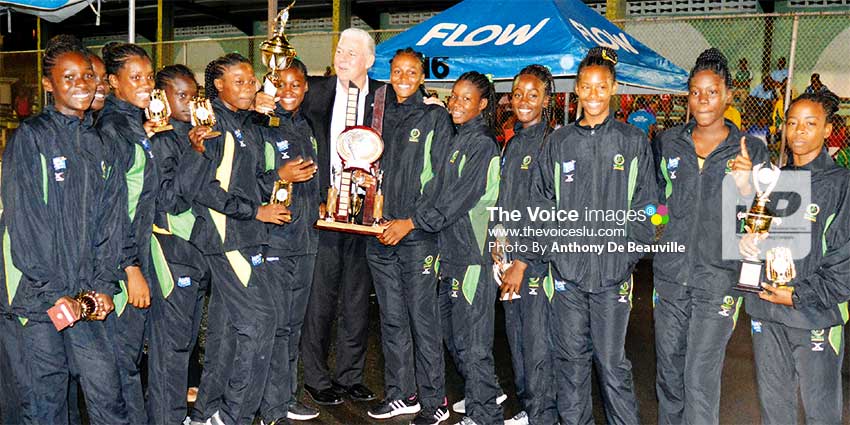 ON the final night of the Caribbean Netball Association’s Jean Pierre Caribbean Youth (Under-16) Tournament, only Jamaica would have been entirely confident of their position, leading with a perfect 25 points from five games played.

Despite a heavy shower and with 34 seconds left on the clock in the final quarter, the Jamaicans proved too strong as they consolidated their position and sealed the 2018 championship on Wednesday night at the Vigie Multi-purpose Sports Complex, beating the 2015 champions Barbados 36-15.

Jamaica won all six of their games with 230 goals and just 82 against, a goal difference of 148.

Host team Saint Lucia came into Wednesday night’s showpiece against Saint Vincent and the Grenadines, dubbed a ‘Battle of the Saints’ because of the centre-court rivalry of yesteryear between the two sides.

The Saint Lucia team looked more superior with 145 goals for and 118 against enjoying the second highest shooting accuracy in the championship, while SVG only had 63 goals for and 155 against.

When the final whistle was blown, Saint Lucia defeated the Vincentians 47-7 to capture the second spot.

In the final game Saint Lucia, depending on the outcome between Jamaica and Barbados, could have ended up finishing in second place or joint second place, if only Barbados had beaten Jamaica. But for the Bajans the only remaining interest was to finish the competition with one defeat, but that was not to be, as they went down to the defending champions 36-15.

In awards presented, for Saint Lucia Keresa Augustin received ‘The President’s Young Achiever Award’, and Bernet Joseph was named the “Most Valuable Player.”

Saint Vincent and the Grenadines was awarded ‘The Most Disciplined Team’, while 11-year-old Selina Brown of Grenada was named the ‘Youngest Player of the Tournament’.

Trinidad and Tobago won the shooting competition and was also named ‘The Best Uniformed Team’ and ‘Best Team on Parade’.

Saint Lucia’s Head Coach, Shem Maxwell, told the VOICE, “For sure the girls knew what was at stake because I did the maths. We needed to score goals against Saint Vincent and the Grenadines and that the girls did. The team did a brilliant job and for that I am proud of them. “

Saint Lucia Prime Minster, Allen Chastanet, who was present on the final night, commended the SLNNA, as well as the Department of Youth Development and Sports, for staging of the championship, as it is a good sign for netball in Saint Lucia.

He went on to congratulate the Jamaica team for what he described as their incredible level of competition.

He continued, “I am going to age myself, I actually was an economist when Ms Angela Brice and Ms Aldith Edith Issac were here when we put this facility together in 1986.

“I was upset in 1986 that we were building a facility like this outdoors and on this very tough surface. I want to make a promise. The next time we have a major regional tournament here. We will have a cover and a new surface for everyone to play on.