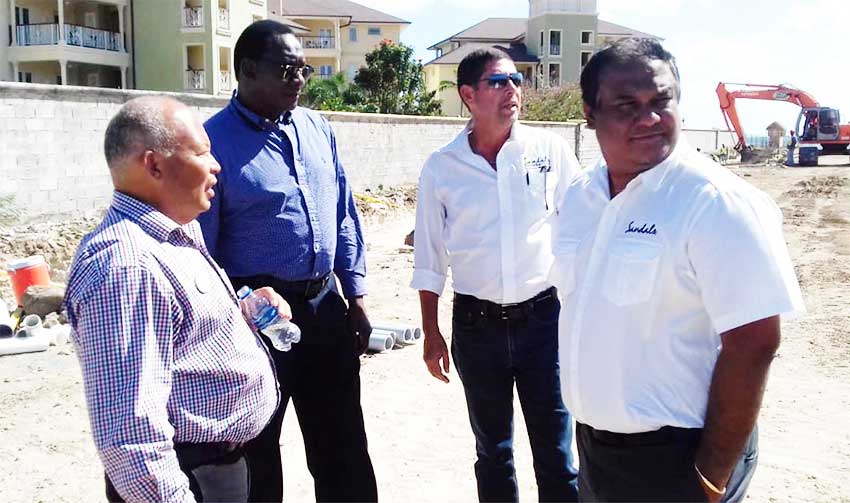 THE new Sandals Saint Lucia hotel will have a significant impact on easing unemployment not just in Gros Islet, but in Saint Lucia as a whole.

This from Member of Parliament for Gros Islet Lenard ‘Spider’ Montoute, as he toured site preparation activities for what will be Sandals’ fourth hotel in Saint Lucia.

Montoute, who is Minister for Equity, Social Justice and Empowerment, said it is important for both the individual communities and country as a whole that such new investments get off the ground as soon as possible.

“I am excited about the prospects for jobs and of course, quite apart from Saint Lucia at large benefitting (so will) neighbouring communities including mine. I look forward to many of my constituents benefitting from the job opportunities, not just during construction, but afterwards… there are some 900 (full time) staff members who are going to be employed, obviously if we can get a couple hundred from Gros Islet that will make a big dent in the unemployment situation.”

Minister Montoute said he was also quite pleased that necessary steps were being taken to protect the environment and state of the roads during construction.

The Minister was joined on the tour by Sandals Saint Lucia Managing Director Winston Anderson, Senior Project Manager for the Eastern Caribbean Mark Harding, as well as Regional Public Relations Manager for the E.C. Sunil Ramdeen.

Mr. Harding revealed that there are already some 30 to 40 persons employed on site, which will increase to a high of 1,200 once work gets into full swing. He also assured the public that measures are being put in place to ensure that trucks that are on site are washed before they get out onto the public roads, avoiding mud trails on the roads. It was welcoming news to the M.P.

“The environment here is our environment and whatever negative takes place can affect us. The Project Manager just said they are taking into consideration the silt going into the water and the trucks. I mean you would recall a previous project where we had serious problems with mud on the road and all that kind of thing, and if we can avoid that then this is the kind of conscientiousness we are looking for from our developers.”

Managing Director Winston Anderson revealed that significant cost and effort has already gone into preparation work for this 380-all suite hotel, which promises luxury inclusions never before seen, and which has already captured international attention.

“In fact many international tour operators have already started positioning Sandals Saint Lucia as an option. The eyes of the world are upon us, and we remain committed to enhancing our investment for the benefit of all. Not just the construction workers, but vendors, taxi drivers and many others from Gros Islet will stand to benefit from the economic spin-off once this project gets underway. We cannot disappoint them or those watching the world over as we get this project off the ground.”