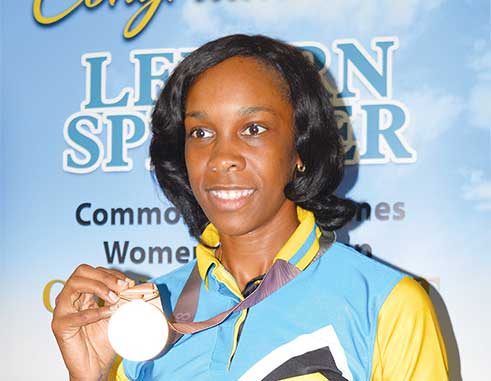 Saint Lucia’s Top-ranking international high jumper brought home the Commonwealth Gold and said: ‘This one is for you, Saint Lucia!’

SAINT Lucia’s top-ranking international high jumper, Levern Spencer, returned home on Thursday to a heroine’s welcome after becoming the first Saint Lucian Track and Field athlete to win a gold medal at the Commonwealth Games on the Gold Coast in Queensland, Australia, a week ago by clearing 1.95 meters.

Addressing the appreciative local gathering on the Derek Walcott Square on Thursday evening, she said, “This one is for you, the people of Saint Lucia!”

After a short welcome ceremony at the HIA VIP Lounge and a meet and greet session with students, members of the Babonneau Community, the Saint Lucia National Women’s Cricket Team and members of the public, a motorcade — led by outriders of the Royal Saint Lucia Police Force Traffic Department — accompanied Spencer back to Castries, to a celebration held at the Derek Walcott Square, where a number of patriotic Saint Lucians came to say: “Thank You Levern, you made us proud.”

Addressing the gathering, SLOC President Belrose said, “Levern has made Saint Lucia proud and has set the island apart from all other countries formerly ruled by Great Britain.”

Then, addressing Levern, she said: “For Saint Lucia, at this time, you have emphasized the attributes and values we need to maintain and inculcate for sustainable success for our people.

“You have also, through this, brought our reality as a people and nation into sharp focus.”

Acting Prime Minister King said: “As a government, we are proud and stand behind the 2018 Commonwealth Games Gold Medal winner Levern Spencer, in providing more support as she continues to pursue her sporting career.”

King said Levern continues to be an icon who young Saint Lucians should look up to for inspiration and motivation.

In a national gesture of appreciation, Spencer said she started this sporting season very apprehensive after being forced out of competition due to injury last year.

The gold winner said: “I am glad that one of my big sporting dreams has now been realized, in that after two previous bronze medals in New Delhi, India in 2010 and Glasgow, United Kingdom in 2014, I brought home a Commonwealth Games gold medal, something I will forever cherish.

“This one is for you, the people of Saint Lucia!”

The national high-jumping queen continued: “I trust that it was a proud moment for all Saint Lucians as it was for me, because this is all that I have sought to do for my professional career — to place Saint Lucia on top of the world and to show that, despite our size, we can soar to great heights.”

She concluded: “I hope that my achievements will inspire younger Saint Lucians to aim high and perhaps capture the elusive Olympic gold medal.”