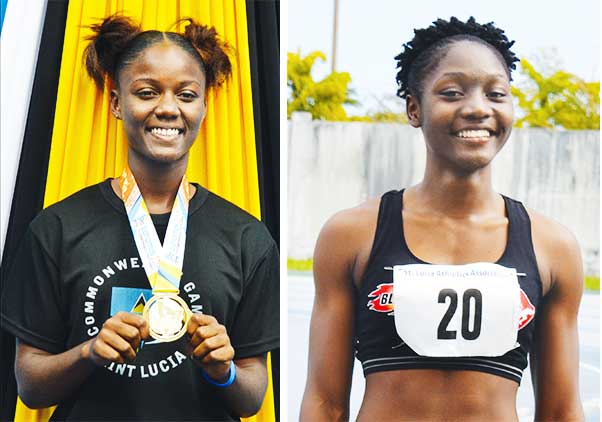 THE trio of Julien Alfred, Mechaela Hyacinth and Rueben Nichols all with international experience at the youth level will head Saint Lucia’s team named at the weekend for this year’s CARIFTA Games in the Bahamas from March 30 to April 2.

Alfred, who is the resigning Commonwealth Youth Games 2017, 100 metres girls champion will return to the same venue where she created history by winning the gold medal for Saint Lucia, the first by a Saint Lucian track athlete. Alfred heads the list in the under – 20 girls announced by the Saint Lucia Athletic Association.

Keeping a close eye on a podium finish is Mechaela Hyacinth; she represented Saint Lucia in 2015 at the IAAF World Youth Championships in Cali, Columbia, Mechaela finished 3rd in Heat 7 with a personal best time of 11.93 seconds in Heat 3 that qualified her for the semifinal round; she went on to obtain another personal best time of 11.87 seconds to finish 5th in Heat 1.

Currently attending college in Jamaica, 400 metres runner Reuben Nichols will want nothing less than a piece of silverware at this year’s championship, he last represented Saint Lucia at the IAAF World Under – 18 Championship in Nairobi, Kenya; Reuben finished 4th in Heat 3 with a time of 49.22 seconds that qualified him to compete in the semifinal where he finished 5th in Heat 3 with a personal best time of 48.01 seconds.

At this year’s CARIFTA Games Nichols will be going guns- a- blaze in the 400 metres for under -20 boys.

Saint Lucia’s 15 -member squad along with 2 officials will depart on Wednesday 28. In the Bahamas, the team will be under the watchful eyes of Coach – MakebaAlcide (female) and Claude Charlemagne (male). There is no word yet as to who will lead the delegation to the Bahamas.

Saint Lucia last medaled at the games when it was held in Saint Kitts at the Kim Collins Track and Field Stadium in 2015, but failed to show slate in Grenada (2016) and Curacao (2017).