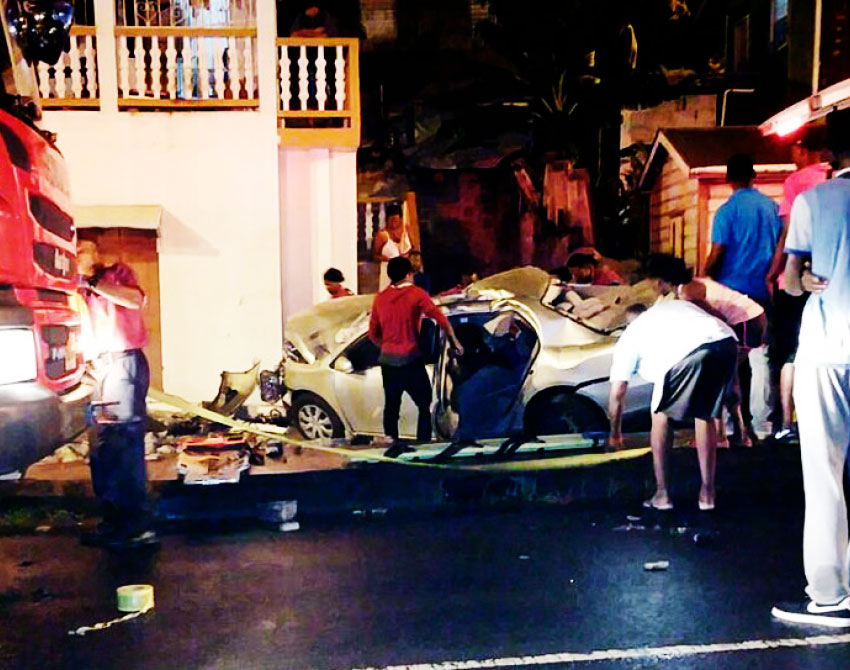 THERE may very well be over 36 road fatalities from vehicular accidents by year’s end if the horrific rate of road fatalities continues as it has begun. So far, there have been seven road fatalities in just over two months in St. Lucia and the projected figure is currently set to dwarf last year’s total of 17.

Kendon Stephen, a 32-old resident of Darban, Saltibus was the first road fatality recorded for the year 2018; succumbing to his wounds on Friday, January 12, 2018, suffered from a December 25, 2017 vehicular accident at Saltibus.

This fatality was followed eight days later by the deaths of Bradley Cyril, a 19-year-old resident of Beasejour, Gros Islet and Brandon St. Omer, who was an 18- year-old from the same area. According to police, “investigations revealed that the motor car veered off the road and collided into a wall.”

This brought the number of road fatalities to three.

Even a toddler has been a victim of this year’s high rate of road fatalities, as “two year old Alexander Samuel of RiviereMitant, Gros Islet…died as a result of a vehicular accident…on Friday, January 26, 2018…” according to police reports, a road fatality that brought the number for the year to four.

Early last month youth cricketer Nick Elibox, 19, died when the motor vehicle he was driving veered off the road and collided with an earth embankment.

Elibox was transported to Victoria Hospital via ambulance but succumbed to his injuries that same day. This was the fifth road fatality for the year.

On the first day of March, the sixth and seventh road fatalities occurred. Police reported that “Mary Joseph of Tomazo and Dave Albertson of Bexon…died as a result of a vehicular accident…along the Bexon Highway.”

Thirty-six road fatalities, if that figure comes to fruition by year’s end, would surpass the 2017 road fatality figure of Barbados. Per a Barbados Today article entitled: First Road fatality for 2018, “there were 28 road deaths recorded,” in 2017.

Barbados is an island with a population of 286,388 as of this year, per statistics provided by the worldometers.info website. Per the same website, St. Lucia’s population total is smaller than that of Barbados by a margin of over 100 000, with a 2018 figure of 179,667. This means that our road fatality rate per capita is also on course to dwarf that of our neighbouring island, Barbados.

The information on the road fatalities for this year in St. Lucia, was all sourced from News Releases by the Royal Saint Lucia Police Force.