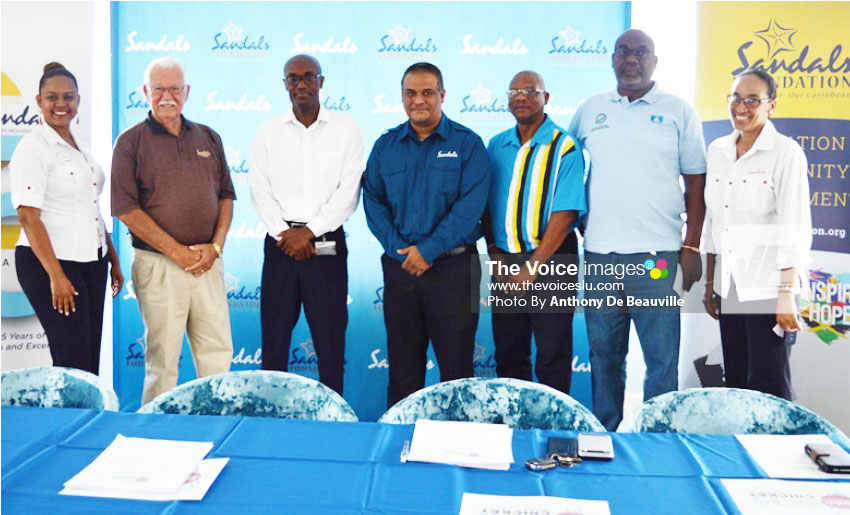 LOCAL cricket received a shot in the arm recently with the inaugural hosting of the Sandals Cup tournament scheduled for this weekend at various venues around the island.

The tournament is an important milestone in the development of cricket in Saint Lucia. The resort’s Regional (PR) Manager for the Eastern Caribbean Sunil Ramdeen made the pronouncement at a press conference at Sandals Halycon Beach Resort.

Sandals International has committed to a three-year sponsorship of an Under-19 cricket competition in the first instance.

In addressing the small gathering, Ramdeen said, “The Under – 19 Cricket Cup will bowl off next month, the details of which I am sure the representative of the cricket association will share with you, but let me state how extremely proud we are at Sandals to support Saint Lucia’s young, talented cricketers”.

Ramdeen recalled having a chat with CEO of Cricket West Indies Johnny Grave, where the two reflected on the challenges that they have had with West Indies cricket over the past years. He said, “It is a challenge that we must all rally together to face, and I assured him and through him the President of CWI Dave Cameron, that Sandals will play its part in helping to return West Indies cricket to its glory days.

“This year marks an evolution of our partnership with the Saint Lucia National Cricket Association and instead of hosting the cricket academy, from this year we will be providing financial support and other support to ensure that we develop the under – 19 tournament, and all the players competing in it. Apart from reaching more players, the goal is to uplift the way the tournament itself is conducted and to bring greater public and media attention to it. It will provide a platform for our local stars to shine and be recognised. This we hope will support the hard work being done by CWI,” Ramdeen said.

The total value of sponsorship is over EC$30,000 and that’s for this year only.

Added Ramdeen: “We have committed to this tournament for three years and once all goes well we will extend it even further. This sponsorship is a testament to Sandals investment in cricket throughout the region and follows a similar development last year, when we sponsored the Under – 19 tournament in Jamaica”.

President of the Saint Lucia National Cricket Association/ Director of CWI, Julian Charles, thanked Ramdeen of Sandals International and reiterated the need for corporate support of the sport in Saint Lucia.

“We are extremely happy that Sandals have decided to invest in our under -19 cricket tournament; we have been looking for a sponsor for this tournament because we believe it is the jewel in our cricket and we have to take care of our youngsters. Sandals have done a great job over the years in having the cricket academy bring a number of experts like Wes Hall, Brian Lara, Desmond Haynes and Derek Murray just to name a few,” Charles said.

He continued, “Sandals is now taking it to a higher level where you will see these youth players mature and some of them getting onto the West Indies team. The likes of Daren Sammy, Johnson Charles and Garey Mathurin and now you have Kimani Melius and Qiana Joseph all having made us proud”.

Charles said, “Sandals is saying now, we have helped you, we have carried you and now we want to see you excel even further. This is a three year contract; it’s not a fly by night arrangement with intentions to remain for a further three years once everything goes right. Sandals are saying to other corporate Saint Lucians, you need to get on board. It’s not just the job of the SLNCA and the job of government”.

“This is a great morning,” said Perreira, “We have a three year sponsorship ahead of us, both parties, Sandals and the SLNCA have signed on the dotted line, that means we are nurturing the players of the future after they have left Secondary School and move into working life whatever direction they are going they are not lost, this is solid sponsorship and great partnership in the making between the two”.

Operations Manager Calixte described the deal with Sandals as “no better gift on the eve of Saint Lucia’s 39th Independence Anniversary.”

Fourteen out of the SLNCA sixteen districts will compete in this year’s competition but with finance not so readily available by the teams it’s not going to be easy sailing for some of them. The SLNCA will assist as much as possible to make sure they are part of this inaugural event. The matches will be played islandwide and will give the SLNCA and Sandals more visibility and promotion.

Calixte said, “With the collaboration with Sandals, it will give the young players from the various communities an opportunity, and motivation, to showcase their respective talent. In showcasing that talent Saint Lucia will be able to produce a few more Daren Sammy and Johnson Charles .Of late we have the likes of Kimani Melius and Qiana Joseph representing the West Indies on the World stage”.

The inaugural competition bowls off on Sunday 11 March at a number of venues around the island and by all indications, this tournament will create a critical path for many young and aspiring youth cricketers to play for Saint Lucia, the Windward Islands and hopefully the West Indies.