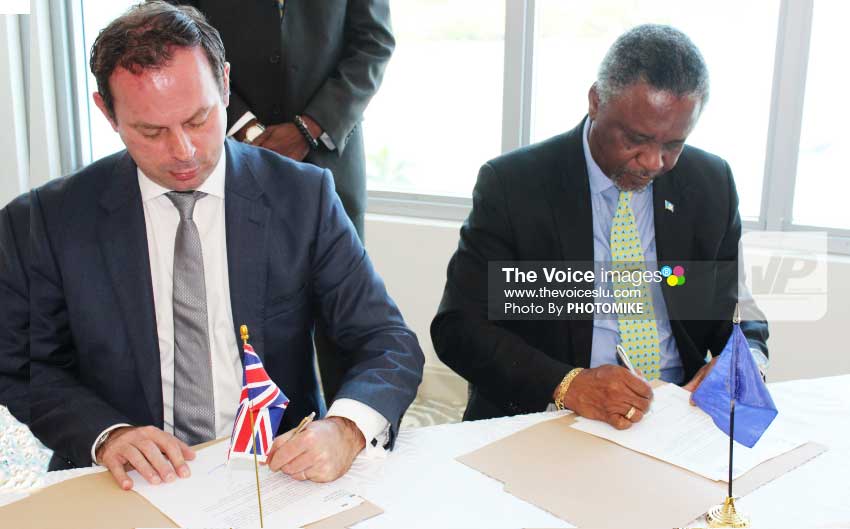 THE Regional Security System (RSS) of the Eastern Caribbean yesterday received glowing endorsements for its efforts to secure the sub-region from transnational organized crime, but was also reminded of the importance of collaboration, forward thinking and adaptability in meeting its goals.

The United States, the United Kingdom and the European Union (EU) bloc of countries all recognized the importance of the RSS to the sub-region’s efforts at foiling crime at an RSS Council of Ministers Meeting at the Harbor Club resort at Rodney Bay.

But in the midst of the high marks given to the sub-region’s security team, the RSS was also reminded of the need to build resilience in light of the devastation last year’s hurricanes caused to some of the countries it serves, such as Dominica and Barbuda.

Outgoing Chairman, St. Lucia’s National Security and Home Affairs Minister Hermangild Francis, said: “The weather forecast for this year informs us that we will experience more severe weather systems and as such we need to make plans for any such eventuality.

“We must build resilience and I believe that we need to re-establish the emergency fund that was stopped a few years ago, as soon as practicable.”

Laura Griesmer, Deputy Chief of Mission of the United States Embassy for the Eastern Caribbean, spoke of her country being a proud supporter of the RSS and values the partnership it has with the RSS.

“To meet your core goal of providing immediate appropriate response to all situations, the RSS must be forward thinking and adaptable. It must be prepared for the worst case scenario, therefore it came as no surprise to many of us that the RSS was the first entity to respond to Dominica after Hurricane Maria,” Griesmer said.

The United States, she said, will continue to collaborate with the RSS on efforts to strengthen citizens security as it moves forward with the Caribbean basin security initiative.

Recalling the devastation of Dominica and other islands caused by last year’s hurricanes, Griesmer said the sub-region must search for ways to be better prepared for such disasters and be climate resilient.

“We believe that technology can and should play an important role in addressing these challenges,’ she said, pointing to the assistance given to the RSS by the United States in support of its digital forensics laboratory.

Francis pointed out to the countries belonging to the RSS the need for their continued support in light of the magnitude of the situation facing the security unit, noting that the unit’s traditional partners were less forthcoming and must thus be more vigilant in making their respectful contributions without delay.

He implored representatives of Ministers of Home Affairs at the meeting to discuss the matter of the emergency fund with their respective ministers, so the commitment could be made — sooner rather than later — to re-establish the fund.

He recommended the tenure of the RSS’s Executive Director to be reviewed and given either three or five years, as this would allow him or her the time required to implement policies of the organization.

Another recommendation was for the organization to award its officers who served in Dominica and Barbuda for more than 14 days the RSS medal as proposed by the Executive Director.

Steve Mc Cready, the Resident British Commissioner in St. Lucia, noted the importance of regional cooperation to the RSS providing an effective response to trans-national crime.

Mc Cready signed a Memorandum of Understanding on behalf of the British Government with the RSS at yesterday’s meeting, extending his country’s financial support to the Asset Recovery Unit to March 2020.