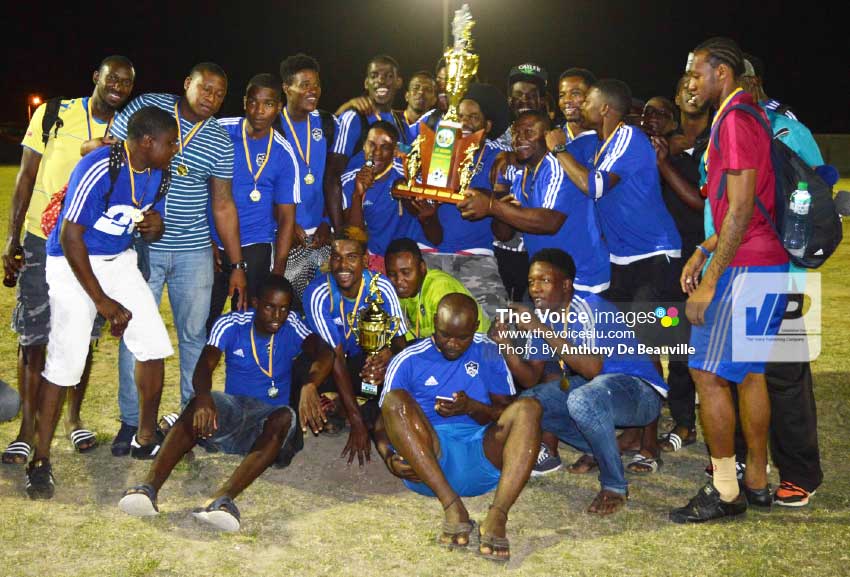 It all happened as the curtains came down on Wednesday evening at the Phillip Marcellin Grounds in Vieux Fort.

Platinum FC, decked in their blue and white attire, left nothing to chance as they drubbed bottom of the table RV Juniors of Roseau 8 – 0.

Delon Neptune opened the floodgates for Platinum in the 23rd minute, while RV Juniors Lunych Gilbert made it 2 – 0, scoring an own goal in the 40th minute. Mid-fielder Gregson President made it 3 – 0 in the 40th (his third in the tournament) to lead his team to the dressing room with the half-time advantage.

On the resumption, it was all Platinum FC: Delon Neptune made it 4 – 0 with a well-taken right foot shot that eluded the RV Juniors custodian to his right in the 46th minute. Neptune kept the fourth official busy in terms of keeping up with the score line, as he made it 5 – 0 — and in the process scored his hat-trick in the 58th minute.

Antonious Mayers came to the party with two quick strikes in the 81st and 85th minutes of play to make it 7 – 0, while Delon Neptune scored his career best, beaver-trick in the 87th minute to make it 8 – 0.

This result also means that the team from the Roseau Valley Football League finished the tournament without a win.

In the second game that evening, Uptown Rebels (Vieux Fort) and Big Players FC (Marchand) played to a goal-less draw.

VSADC finished level on points with Platinum FC. However, Platinum finished with an impressive goal difference of +15.

He said, “It was a tremendous victory for Platinum FC, as the players had the intention to score as many goals as we wanted, because we were not sure what would have happened between VSADC and Northern United in Anse la Raye.

“But, having scored eight goals, it would be difficult for me to think we have not won the tournament. All credit has to go to the entire team. They worked hard and we need to applaud them.”

What does it mean for Platinum FC to represent Saint Lucia at the CONCACAF Club Championship next year?

“I am hoping we are going to get the support from the community, the SLFA and the nation by extension, to make sure we perform creditably when we get onto the regional scene”.