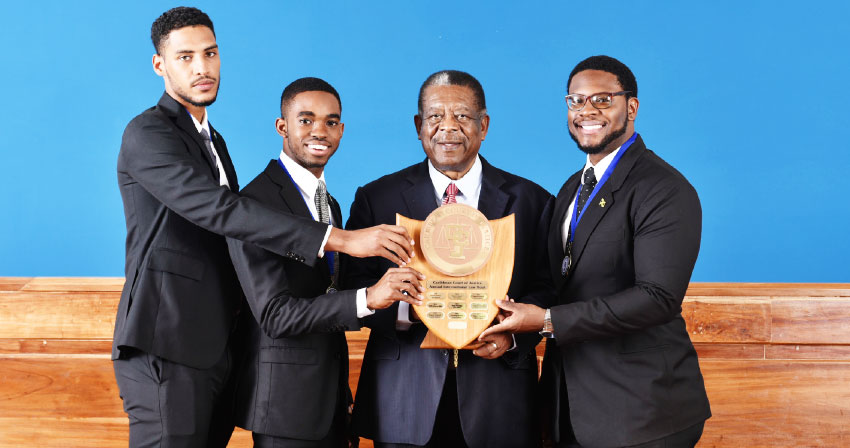 The team was advised by Ms. Tara Carnegie.

The University of the West Indies (Mona) also won the prize for the ‘Best Academic Institution’.

PAHO, an organization whose mandate is to improve and protect people’s health, sponsored the Moot.

Sir George Alleyne, Director Emeritus of the Pan American Health Organization, led the delegation from PAHO that participated in the proceedings.

The annual competition serves a dual purpose – to familiarize law students with the Revised Treaty of Chaguaramas and the workings of the CCJ’s Original Jurisdiction, as well as to provide young jurists with an opportunity to hone their talents and to familiarize them with courtroom settings.

This year’s mooters debated a hypothetical situation where a CARICOM state imposed a tax on imported sugar-sweetened beverages and a ban on advertisement of such beverages on TV and radio.

The President of the Caribbean Court of Justice, the Right Honourable Sir Dennis Byron, who is in his final year in office, stated, “The CCJ is currently poised to contribute to positive change in the social order of our Caribbean societies by delivering justice which is accessible, efficient and reflective of our values and mores”.

He also spoke about the difference the use of technology has made in the operations of the CCJ.

Sir Dennis noted, “This increased efficiency has resulted in a tremendous improvement to access to the court. For instance, in the calendar year 2016, 18 cases were filed in the Appellate Jurisdiction and 35 cases in the year 2017, showing a dramatic increase by 94%.

He noted that most cases at the CCJ are disposed of within six (6) months from filing to the final judgment.

The CCJ President also shocked the audience by revealing that the Honourable Mr. Justice Adrian Saunders, a judge who has been with the Court from its inception, has been chosen as the CCJ’s next President.

The announcement was met with loud and sustained applause.

In addition, a distinguished group of guests witnessed the proceedings including: The Hon. Mr. Justice Ivor Archie, Chief Justice of Trinidad and Tobago; the Hon Mr Justice Carl Singh, former Chancellor and Head of the Judiciary of Guyana; the Hon Mme. Justice Lisa Ramsumair- Hinds, Trinidad and Tobago Judge, Mme. Justice Desiree Bernard, former Judge of the CCJ; His Honour Anthony D.J. Gafoor, Chairman of the Tax Appeal Board; Dr. KushaHaraksingh, Chairman of the CARICOM Competition Commission; as well as members of the diplomatic corps, jurists and academicians.