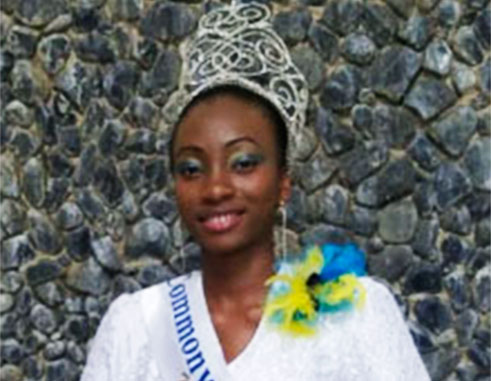 DEMOCRACY, diversity, peace, equality and unity, were several mini themes touched on by Kurnisha Augustus, the reigning St. Lucia Miss Independence queen, as she spoke on this year’s Commonwealth theme: “Towards a Common Future”, in her address to students of the Castries Comprehensive School on World Commonwealth Day last week.

Stating that “we are bound together by a sense that the Commonwealth is a powerful influence of good…” the reigning Independence Queen took the time to highlight what she called the “values of peace, democracy and equality…” shared among the 53 member intergovernmental organanisation.

She also spoke about the “unity that is expressed in this year’s [Commonwealth] theme”, stating that the people who belong to the Commonwealth are “weaving an ever-growing network of links” that “connect us in our diversity…”

Her speech in full can be read below.

Fifty-three countries will come together today 12 March 2018 to celebrate Commonwealth Day under the theme ‘Towards a Common Future’.

Commonwealth Day, held on the second Monday in March each year, is an opportunity for individuals, communities and organisations to promote the Commonwealth’s shared values of peace, democracy and equality, and to celebrate the association’s rich diversity.

Affinities of history and inheritance from the past are strong, yet we are bound together by a sense that the Commonwealth is a powerful influence of good for the future. People of all ages from different cultures are weaving an ever-growing network of links which connect us in our diversity and our common purpose. It is this unity that is expressed in this year’s theme: Towards a Common Future

Experiences of life differ widely throughout the Commonwealth and throughout our many communities in Saint Lucia and we each make contributions from sometimes very different viewpoints. But we are committed to the same goals. Together we offer each other encouragement and draw strength from this mutual support.

I am delighted that as the current Miss Independence 2018 to be part of a process which seeks to build a brighter, united future in which every one of us can play a part and share in its rewards.

As our leaders get set to meet in London for the Commonwealth Heads of Government Meeting we must ensure that they can carry our concerns as young people and as students across the waters. That they can address global challenges we face as a people and work to create a better future for all citizens with a focus on sustainability, safety, prosperity and fairness, in line with the theme of the 2018 Commonwealth Heads of Government.

As young people too often we remove ourselves from the happenings of the outside World–well more the politics– and we tend to connect more with what’s hype and what’s the latest celebrity gossip. But how often do we take time to reflect and even research on our presence and representation within the Commonwealth.

Our young persons like Ajani Lebourne who continued the history in 2017 as a student leader by being the second St. Lucian to receive, the Queen’s Young Leaders Award and before him community youth worker, Tevin Shepherd, became the first St. Lucian youth to be granted this award in 2016.

Our historic victory at the Commonwealth Youth Games in July of 2017 (saw) Julien Alfred capture Gold in the 100M Finals. She is a former student of the Ciceron Primary School and the Leon Hess Comprehensive School.

Now remember the Commonwealth is a voluntary intergovernmental association of 53 member states, almost all of which were formerly ruled by Britain – directly or indirectly.

Therefore, the group encompasses nations from Africa, Asia, the Caribbean, the Mediterranean and the Pacific. The states involved agree to share a common set of values and ideals, and acknowledge a shared history and traditional trade links.

For us as young people the Commonwealth provides access to sporting glory and opportunities, educational, such as the Chevening Scholarships where we currently have 3 St. Lucian students studying in the UK
– Kendal Elva
– Allisha Ally
– Louise Victor

I urge you to take some time today and reflect on the theme “Towards a Common Future: Understand that together as young people, as students we need to stand together for a common productive future for each other.