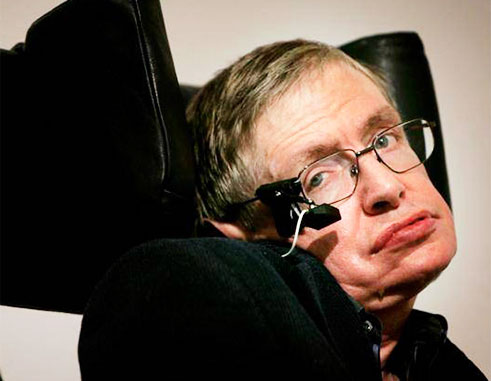 IN the wake of the death of the world’s most infamous militant atheist, Stephen Hawking, it is now more critical than ever to expose atheism, for what it really is…a religious philosophy that rejects the existence of God.

Atheism, is not, as many people believe, based on science. What has happened is that many in the scientific field or those who pass themselves off as scientists, claim that their ‘scientific’ findings ultimately disprove the existence of God; none more so than Stephen Hawking. However, no true scientist would ever come to that conclusion.

Science by definition is “any system of knowledge that is concerned with the physical world and its phenomena and that entails unbiased observations and systematic experimentation.” (According to the Encyclopaedia Britannica)

God, according to the Bible is “a Spirit” (John 4:24) and therefore not physical. Therefore science, which by its very nature only treats with the physical, does not nor ought to even attempt to answer the question of God’s existence or treat with any other spiritual matter. Science only deals with the physical and therefore anyone who says that science disproves the existence of God, is lying to you.

Atheism therefore is a philosophy. By definition philosophy is “the rational, abstract, and methodical consideration of reality as a whole or of fundamental dimensions of human existence and experience.” (Encyclopaedia Britannica)

Since philosophy by its definition treats “with the whole…of human existence and experience” and humans are both physical and spiritual in nature, while science can only treat with man’s physical attributes, it is philosophy that delves into both the physical and the spiritual aspects of man.

Atheism’s attempts therefore, to answer the question of God’s existence is based on the philosophical belief that God does not exist. It is a question about someone who is spiritual; and therefore the assumption and conclusion of atheism is of a philosophical and not of a scientific nature.

If a scientist says “God does not exist,” he is speaking his own philosophical opinion. He is not giving his scientific opinion, because as the definition of science points out, science only treats with the physical; and God is not physical.

Nothing therefore that is observed in the physical realm (scientific observation) is aimed at proving or disproving God’s existence. Philosophy is what attempts to answer that question. The Catholic religion (philosophy) answers the question with this: God exists. The opposite philosophy atheism, asserts that He does not.

There is in fact no way atheism can disprove the existence of God, since it claims to rely on science to prove it. “One can’t prove that God doesn’t exist.” Now who said that?

Allow me therefore to parse some of the things Hawking said to “disprove” the existence of God; which in fact he wasn’t doing but rather he was putting forward his own philosophical belief.

In an interview with Mundo in 2014 Hawking said this about God’s existence: “What I meant by ‘we would know the mind of God’ is, we would know everything that God would know, if there were a God, which there isn’t. I’m an atheist.” (Washington Post)

So Hawking bases his entire argument in support of the “non-existence of God’, on a “theory” that if God does exist, men would know everything He does; which is not only asinine, but also doesn’t offer any proof that God does not exist. There is nothing scientific in Hawking’s machinations about God. Rather, his thought is solely reliant on philosophy.

He doesn’t believe in God. He has no scientific evidence to back his erroneous philosophical views. Rather, he relies on his stature as a ‘scientist’ to provide weight to a belief that has no grounding in science.

Here is yet another quote from Hawking which further proves that his anti-God talk was nothing more than erroneous philosophical speech, with no basis in scientific evidence. “Because there is a law such as gravity, the universe can and will create itself from nothing,” (The Grand Design)

While this sounds more (sciency) than the previous quote, don’t let the use of fancy words fool you. Hawking ridiculously states “that the law of gravity” (a law which isn’t even consensus in the scientific community) means that the universe could create itself.

There is nothing in nature that self creates and so Hawking doesn’t even have physical precedence to prove his ridiculous argument. This is perhaps why he went on to say in his laughable book, that “Spontaneous creation is the reason there is something rather than nothing, why the universe exists, why we exist.”

Again there is no such thing as spontaneous creation in nature. Hawking sounds desperate when he goes on to say that “It is not necessary to invoke God to light the blue touch paper and set the universe going.” This sounds more like a quarrel with God who Hawking knows exists, rather than a serious attempt at proving He does not.

However, true religion does prove His existence and God Himself has proven it over and over again. Those who ignore the evidence have their own agenda and they allege science to increase the gravitas of their weak arguments.

He says “The laws of physics can explain the universe without the need for a creator”; but doesn’t elaborate how this is so, when physics does not claim to study the spiritual. (Which God is)

Hawking, in his book Theory of Everything, said on the afterlife “I believe the simplest explanation is, there is no God.” Well, making things simpler in your limited view of the world doesn’t make it scientific fact Mr. Hawking. Again a true scientist knows that science can offer no thesis on God, since God is a Spirit and science treats only with the physical.

Hawking went on to say “No one created the universe and no one directs our fate.” How then did the world come to be? Hawking never provides a viable alternative to God. And no, gravity and the Big Bang are not viable alternatives to any logical person as the source of the world’s creation.

He goes on to say “This leads me to a profound realization that there probably is no heaven and no afterlife either.” How would Hawking know whether or not there is a heaven and an afterlife when both things are spiritual; and science (the tool Hawking claimed to solely rely on) does not deal with either thing?

If Hawking truly only believed in science, why did he even address the God question and the question of Heaven and the afterlife? Those things aren’t observable in the physical realm, nor are they measurable; which means they are beyond the purview of science. Yet Hawking spoke about them rather extensively.

The truth is, now that Hawking is dead, he has gotten all of the answers science has failed to provide not only to him but to everybody. He now knows that God exists; he has met God in the afterlife and although he has not seen Heaven, he definitely knows where Hell is.