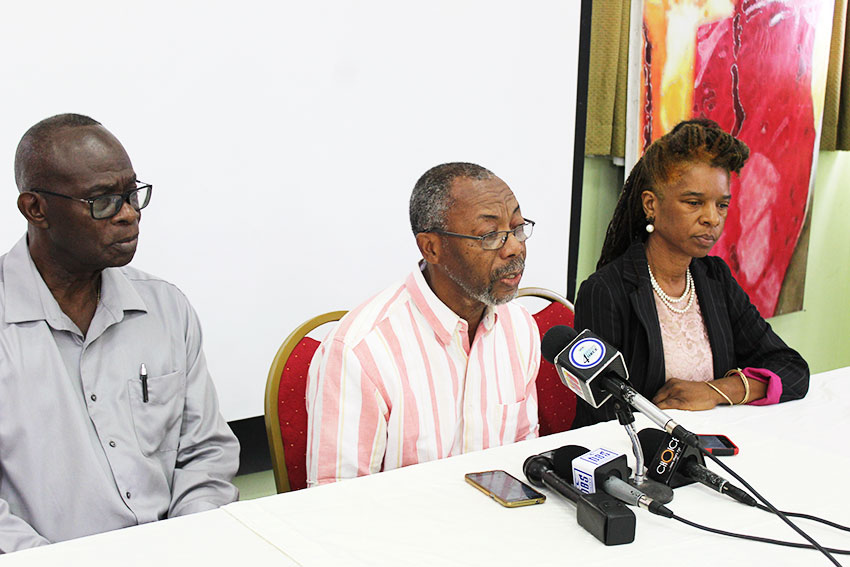 So said Patrick Anthony at a press conference held Monday morning in the aftermath of the fire that sent the Folk Research Centre (FRC) up in smoke — and with it all of the stored documents, audio and video recordings of St. Lucian history that were exclusively located there.

The senior local priest and founding director of the FRC was not alone in his sentiments. The other FRC representatives, who accompanied him also echoed his positive words.

Hilary La Force, Director of the FRC said: “While the building and all this valuable information that we gathered over the past 45 years in terms of print, video, audio, these may be destroyed, it will be difficult to replace them; but the heart and soul of our culture is still with us.”

Chairperson of the FRC, Magistrate Florita Nicholas responded in like manner to her FRC counterparts stating: “The fire has taken the building, but the fire has not taken the soul of this nation which rests in its culture.”

She also said that although the destruction of the FRC building by fire is “a sad moment…sometimes where one journey ends another journey begins and that’s where we stand at the Folk Research Centre.”

Anthony also touched on some of the cultural aspects of St. Lucian society the FRC has had a direct hand in initiating and perpetuating.

He stated that the “Folk Research Centre started JounenKwéyòl” and that “JounenKwéyòl cannot be burned by flames.”

When speaking about the “system of writing Kwéyòl that came out of the work of FRC and a number of institutions” he reemphasized once more that “Fire cannot burn that.”

It was the message that the three FRC representatives, wanted to ensure was sent: that despite the grave loss the FRC suffered at the hands of the flames, including the building, documents, audio and video, “the Folk Research Centre will never die.”

Firefighters did get to the FRC building after being alerted about the fire late Sunday night (sometime after 10p.m.), but despite extinguishing the blaze, they were not able to save the building or any of its contents.

The smoke from the charred building could be smelt all the way in Sans Souci from its Mt. Plaisance location, even up to 7a.m.

The cause of the fire is still being investigated.