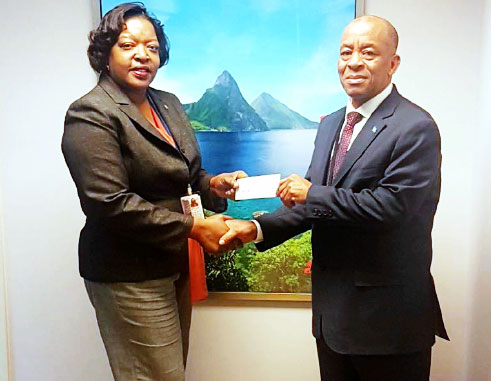 This cheque represents money raised by the organization through a recent fundraising effort to assist the people of Dominica in the aftermath of Hurricane Maria.

The Category Five storm brought devastation to the Caribbean island on September 18 of last year.

Ambassador Richardson stated that he was thrilled to offer this small but highly symbolic donation on behalf of SLAAC, as it highlights the strong relationship that exists between the two islands.

In accepting the gift, Ambassador Bannis-Roberts said in turn that she was immensely grateful that the Saint Lucian Community in Connecticut has not forgotten their sister island’s continuing relief efforts.

The presentation took place on Tuesday, March 20, at the office of the Permanent Mission of Saint Lucia to the United Nations.

The Saint Lucia American Association of Connecticut was launched in 1998, with the sole purpose of cultivating cultural unity and awareness.

In light of its mission, SLAAC works to build social, charitable, and economic vitality within the Saint Lucian community in Connecticut.