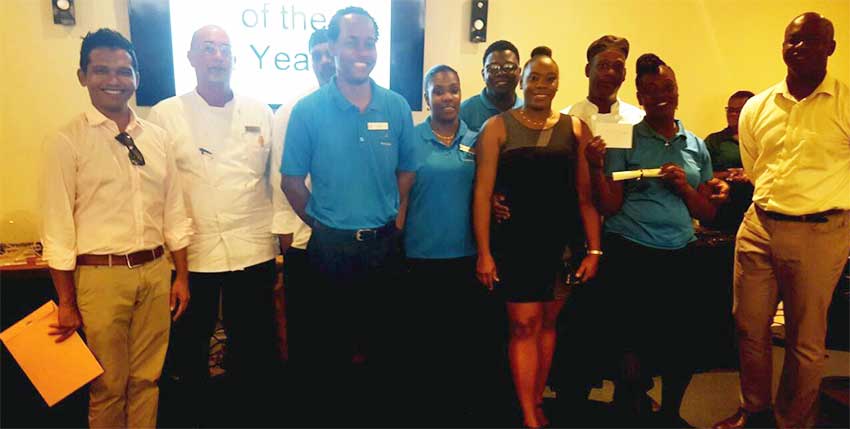 PRESS RELEASE – THE Landings Resort and Spa has marked its 10-year anniversary, in part, with a small Staff Awards Ceremony highlighting the achievements of the longstanding staff members who have been with the resort.

The ceremony comes on the heels of a series of initiatives aimed at the internal customer, the resort’s associates. Earlier in the year, staff members were provided with training in various departments, including security, front desk, butlers and wait staff — each receiving certification and awards for achievement. The employees were extremely happy with the seamless process and were impressed with how their training was also transferable from department to department.

Further, as part of the personal development and transformation, health and wellness education and testing were undertaken in the following month. This activity marked the resort’s first full resort health fair partnering with Massy Stores, AdVizze Consulting Inc., Cox Farms, St. Lucia Diabetes and Hypertension Association and the Blood Bank, to execute this initiative.

According to the resort’s General Manager, Wilbert Mason, “Although we often embark on many community outreach programmes aimed at poverty reduction, development of the arts and culinary fields, the empowerment of women and youth enrichment which have had far-reaching successes, we have also kept a close eye on the development of our home community, the staff who run the resort.”

He also highlighted the importance of nurturing the relationships cultivated within the group dynamic and rewarding great efforts. To this end, he thought it prudent to end the series of events with a financial forum which saw speakers from the legal fraternity, Lorraine Glace, and accounting, Adeline Yarde, discuss financial freedom and making choices which will safeguard and secure the future.

At the Awards Ceremony held recently, the following staff members were rewarded and received inspiration from the outgoing General Manager, who had announced his departure in previous months. His adopted philosophy of moving from good to great using meaningful steps has resonated with the team throughout his two-year tenure at the resort. His contribution to the development and transformation of not only the façade but the staff has been immeasurable and has not gone unnoticed.

Department of the Year 2017 – Food & Beverage
Special Awards went to Cheryl Dupre (Housekeeping) and Chrishner Mitchel (Sales). The awards ceremony, themed “10 Years of Excellence”, also saw 22 employees being recognized for 10 years of dependable service and years of dedication to the company.

The resort continues to celebrate this key milestone in their journey with the last Epicurean Dining Experience at the Palms Restaurant on December 22 and its annual Christmas and New Year’s celebration the entire family can enjoy.