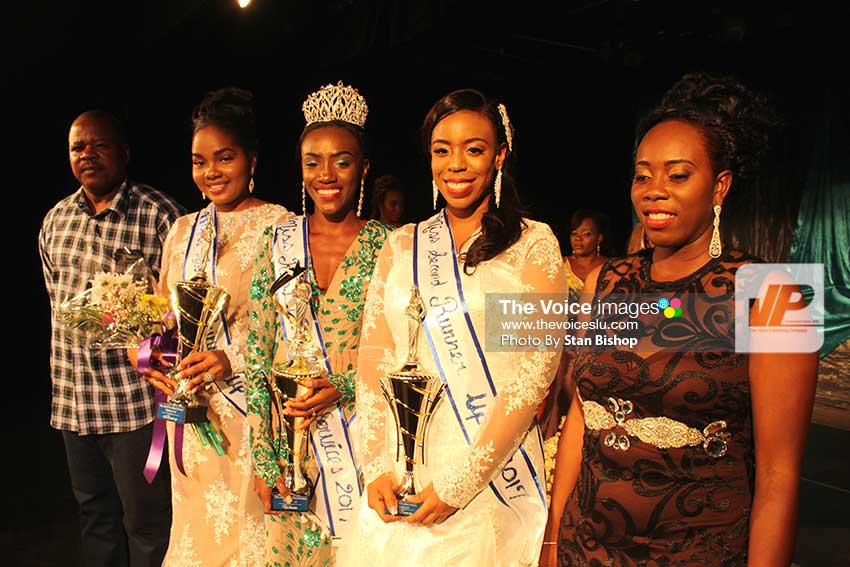 Lyette Rameau of the Praedial Larceny Unit is this year’s winner of the Miss RSLPF & Allied Services title following a dominating all-round performance on Wednesday evening at the National Cultural Centre (NCC).

The show began with a production number featuring the contestants clad in uniform simulating a drill exercise, following which they each introduced themselves to the judges and audience. They later went right into competition gear during the iconic speech segment during which they gave a brief description of who they deem to be icons in the RSLPF. The icons chosen were former Police Commissioners Vernon Francois and Ausbert Regis; Veronica Adley (first female police officer); Mashama Sealy; Alberta Felicien; and Silvina James.

As the night progressed, the competitive spirit became increasingly obvious as the contestants went through the rest of the categories: talent, futuristic police wear, evening wear and interview. These segments proved to be a no-holds-barred cliffhanger as the contestants delivered some mesmerizing performances, especially during the talent segment. Talents ranged from police officers facing daily challenges – financial, disability as a result of the harsh realities of the job, and the remnants of past emotional and other abuse on the psyche.

Among those in the audience cheering the contestants on were top brass of the police force, including Police Commissioner, SeverinMoncherry, who presented the winner with her trophy. Also present was Miss RSLPF 2015, Zamera Frederick, who took her final walk, and subsequently sashed and crowned the new winner.

The show ran for six hours but there seemed to not be a dull moment as the large audience got to see police officers showcase their other talents. Performances by soca stars Teddyson John and Ezra “D’funmachine” Augustin; Faux-a-Chaud Dancers; and the Love Boys (comprised members of the RSLPF Police Band members) were just the cherry on the top of a cake that was well baked.

Among the prizes awarded were scholarships to Monroe College and cellphones.

Last Wednesday’s pageant formed part of this year’s Police Week activities. However, based on the all-round outstanding performances by the contestants, the women in the Royal St. Lucia Police Force seem stronger than the rigours of their jobs demand.