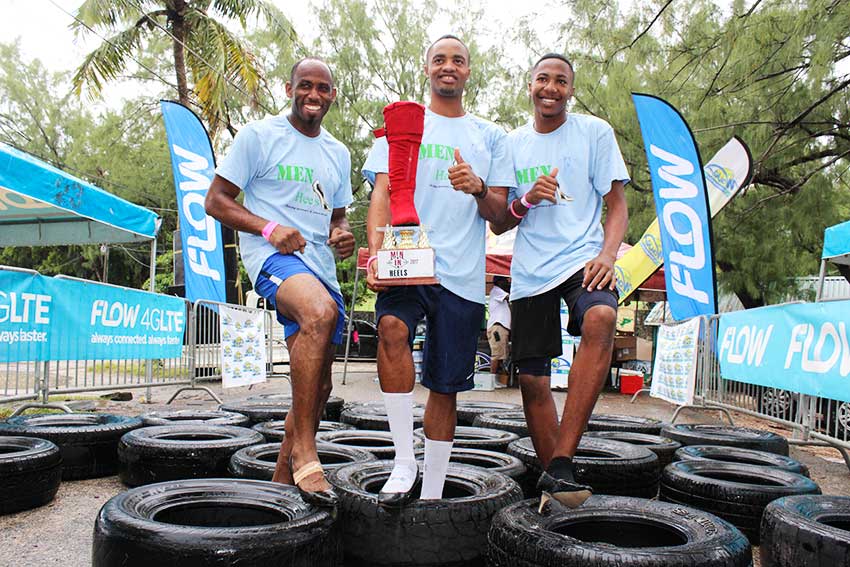 This year’s Men In Heels, organized yet again by The Wave 94.5 and 93.7 FM, brought out some tough guys who mastered the art of balancing their footwork with their support for the awareness of breast cancer.

HUNDREDS of walkers saw past the irony of a rainy Sunday as they came out to support this year’s Yoplait Walk for Cancer held over the weekend. Originally scheduled for a prompt 6:00 a.m. start, organizers gave the signal to begin the race around 6:25 a.m. after it seemed like the rain would not let up.

Armed with umbrellas, raincoats and whatever else they could shelter themselves with from the rain, walkers made the long 6-mile trek from Massy Mega at Choc to Pigeon Island National Landmark – all in solidarity of raising awareness for breast cancer.

Massy Stores Marketing Manager, SanchaRaggie, who has seen the event gain momentum over the years, told The VOICE that the tenth edition of the walk seemed doubtful at times. However, she said the sheer determination expressed by the walkers changed her outlook.

“I was very nervous at first about the weather. But when I came out, I felt really pleased when I saw people who wanted to make a statement about their support for breast cancer. They had their umbrellas and raincoats and I was very proud to be part of it,” Raggie explained.

Every year, she said, Massy Stores tries to increase the amount raised from the event, which is subsequently given to the National Community Foundation (NCF) and Faces of Cancer St. Lucia.

Funds raised from the sale of Yoplait yoghurts and the walk are now augmented by customers making donations at the cash registers in the stores, as well as sales from branded items about breast cancer that are also sold in Massy Store outlets. Such items include pens, scarves and hair bands.

Ten years ago, Massy Stores (then trading under the Consolidated Foods Limited moniker) introduced the walk with the main objectives being raising awareness about breast cancer and raising funds.

On the participation of men in the walk, Raggie said: “The fact of the matter is that breast cancer is spreading. As a man, you may know someone who has breast cancer. So everybody knows somebody who has it and it’s really good that everybody tries to play a part. Men can get breast cancer because they have breast tissue as well, and should do the monthly breast examinations.”

The Men In Heels component of the walk is organized by The Wave radio station, which using the Yoplait Walk to push the awareness envelope further by making men a direct part of the equation.

Last year, eight men competed in the competition. This year, nine did. Held right after the Yoplait Walk wraps up, the Men In Heels race is basically an obstacle course. Rules are simple: the all-male participants must first register by paying $10, then strap on a pair of women’s high heel shoes provided by organizers and compete in heats.

After being given the signal, the men must run through a maze of tires spread out across the road, kick a football, put a sack of sand into a wheelbarrow and push it until they get to a 6-foot scaffolding over which they must climb and dismount, then drill three screws into a piece of wood using a power drill before rushing toward the finish line. Sounds easy, right?

The winner of each heat advances to the final for the big showdown.

This year’s Men In Heels winner, RaideHippolyte, a Sandals Halcyon employee, won the race for the first time last year. This year, he decided to make it a two-in-two, defeating yet again Julian Toussaint, who won the competition in 2014 and 2015. In third place was Chris Cenac.

“A lot of people suffer from cancer. This initiative is great because it brings a different form of publicity to the awareness by getting more people to become sensitized,” Hippolyte told The VOICE moments after his win.

Hippolyte, 26, said someone close to him died from cancer some years ago and he felt empowered to participate in the race to raise awareness – as well as the $1,000 at stake.

“I’m empathetic to the fact that a lot of people are passing away through cancer,” he said. “It has to do with lifestyle as well – certain things we eat. So that’s one aspect I’ll probably preach about one day: that what you eat can get you to that point.”

While breast cancer among Saint Lucian men is a reality, many men choose not to discuss the issue, preferring instead to treat it as a “women’s issue”. However, Hippolyte stressed that men need to man up and confront the issue head-on.

“Cancer doesn’t have a face; it doesn’t pick and choose any race, any colour and any specific type of people. It targets everyone,” he said.