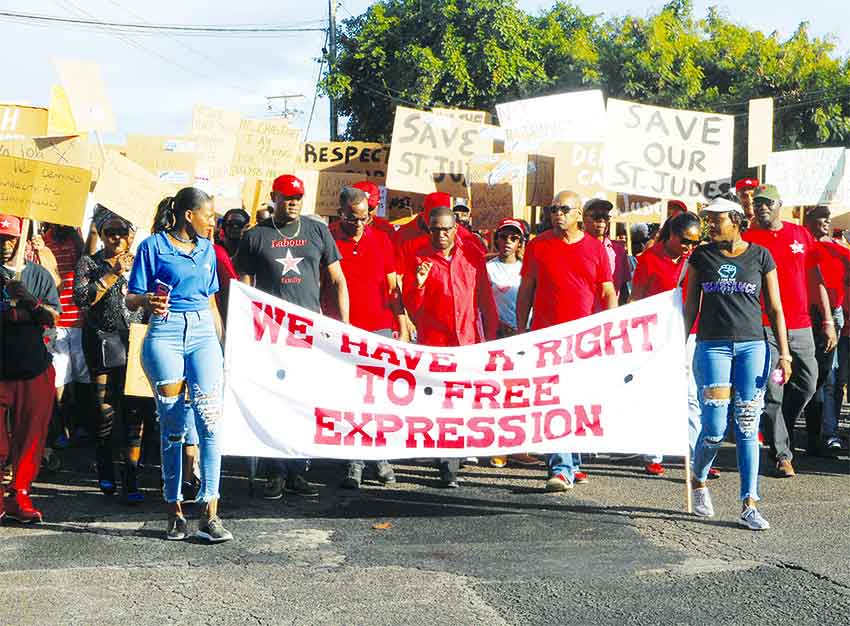 HUNDREDS of concerned citizens braved the inclement weather in Vieux Fort on Sunday to take part in a protest march to voice their objection to government’s reported plans to demolish the St. Jude Hospital and its apparent inability to manage the country as a whole.

The march, which was organized by the St. Lucia Labour Party (SLP), commenced at the La Ressource Playing Field and ended in Augier, about 100 metres from the hospital, where it held a meeting.

The protesters, who from all appearances were in a militant mood, carried placards with messages such as: “DSH–Horse Sh*t Deal”, “St. Jude is ours — give it back to us”, “The UWP government all guilty”, and “No St. Jude No Peace”.

At the meeting, the atmosphere was electrifying as the various speakers made their point forcefully. They did not mince words in their scathing attacks on the government in speeches which were punctuated with wit and humour.

The speakers said that Prime Minister Allen Chastanet has no credibility and as a result St. Lucians should not take his word when he said that the hospital will not be demolished.

The fired-up gathering responded with a loud “no”.

“We have to stand firm and ensure that the St. Jude Hospital is not demolished,” Jn. Baptiste stressed.

Jn. Baptiste added that the UWP regime, which was in office at the time of the fire at St. Jude, did not leave money for its reconstruction, but the former administration made it its duty to source funds to do so.

In his hard-hitting presentation, Julius James of the Vieux Fort Concerned Citizen Coalition for Change, said: “We are not happy with the way government is handling the St. Jude Reconstruction Project and the options it is proposing for the future of the hospital.”

James said it is time that the government shows that it is a government of the people.

“This is the time to get together and put aside petty politics and do what is in the best interest of the country,” James said.

According to him, politics is breaking up families and dividing institutions such as churches and schools. James asserted that there is enough material and money to complete the hospital.

“So you want to give it a fresh start,” he said, rhetorically, triggering a thunderous applause from the crowd, some of whom were very much concerned with the number of contracts given to the construction company, Fresh Start.

He said the leaked audit report on St. Jude Hospital did not say anything about demolishing it.

She added: “Now they want to demolish it? Not one block!”

Party member Guibion Ferdinand said: “When you march things happen and if we have to march again, we will do it.”

He called on Economic Development Minister Guy Joseph to make public the audit report on St. Jude Hospital which cost the country almost one million dollars.

“We challenge them to take the audit report to parliament and discuss its findings where we can represent you and ask questions,” Ferdinand said.

Dennery North MP, Shawn Edward, said the large turnout was a demonstration that the people are fed up with the wickedness of the government.

“The power is in your hands,” he said.