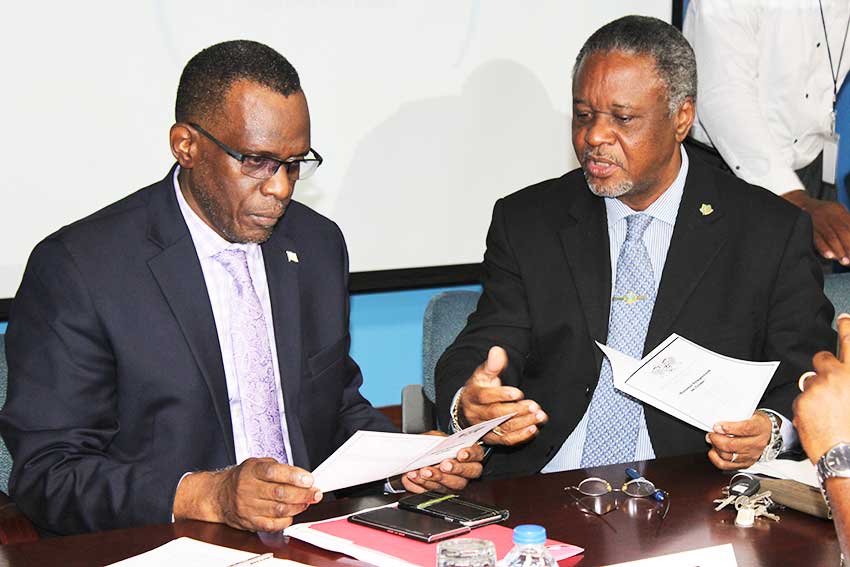 WITH 54 homicides to date and an avalanche of criminal activities occurring each day, participants at yesterday’s crime symposium had their work cut out in coming up with proposals to arrest crime.

They were given the assurance that their suggestions, ideas and whatever else offered would not sit idly on a desk in a government ministry collecting dust, as has been the case for years, but would be taken to Cabinet and transformed into a policy to be implemented either on a short-, medium- or long-term basis. In fact, National Security, Home Affairs Minister and Justice Minister, Hermangild Francis, gave that guarantee.

“This (body of recommendations coming out of the symposium) is not going to be documented and kept on any shelf. There have been incidents of previous symposiums where material has been given, and if you go to the Ministry you cannot find it. It seems to be a personal document, and that should not be. So whatever document comes out of this symposium, we are going to share it with you because you are the stakeholders,” Francis said.

The Minister has been pushing for such a conference for some weeks now, saying he got the idea from Leader of the Opposition, Philip J. Pierre, himself a staunch advocate of community participation in the fight against crime.

Yesterday, Francis was clear about the symposium’s purpose and his ability to make something happen with whatever comes out of it.

“The naysayers have indicated this is another talk shop and nothing will come out of it. I beg to differ. I am going to give you the guarantee that whatever emanates from this symposium will be sent to me and I will discuss it with Cabinet, and I will give you the guarantee that you will see action being taken on the initiatives proposed,” he said.

He promised participants who packed the conference room at the Minister of Infrastructure that he will get back to them on whatever decision is taken by Cabinet — be it in the short-, medium- or long-term.

Pierre, who repeatedly had raked the government over hot coals for its seemingly futile efforts at tackling the scourge of crime, spoke of how pleased he was at having a continuation of a national dialogue on the escalating state of crime in St. Lucia.

“There have been many previous attempts to cultivate a national consensus on how to fight crime. This is not new. What has been a difficulty is the persistence in approach and consistency in commitment over various administrations and not implementing recommendations,” Pierre said.

Pierre, a former Deputy Prime Minister, called for a serious, frank and open discussion on several things, including marijuana.

“We need to talk about the use of marijuana. We need to decide whether it’s right for individuals to be imprisoned for a joint. That discussion is necessary and we must have it. We can no longer hide from it, sweep it under the carpet. We need to have that discussion urgently. Crime is a multi-faceted social problem which must be carefully studied,” Pierre said.

Pierre explained that crime is a result of a breakdown in law and order at all levels, not only in the places called ghettos.

“We must be truthful: we cannot reduce crime if we do not observe the law and the spirit of the law. We must end stigmatization of people because of their place of residence or their beliefs, or their affiliations. A critical starting-point is that there is a clear signal that we are prepared to be serious in fighting crime.

“This gathering can be a powerful statement, but it must never be for the sake of optics or photo-ops or show for talking points. It must be a serious engagement, a determined effort to bring all sections of the community together to study the problem and share thoughts and ideas,” Pierre said.

Police Commissioner SeverinMoncherry said the justice system cannot alone control crime which continues to increase each year, and that the police, courts, corrections and other components of the system are all overburdened and need help.

“Some say the solution is more resources, but in other countries with similar problems, additional resources have not helped. Larger police stations, more courts and more prisons do not seem to have a significant effect on the number of crimes committed.

“It appears that the only way to effectively reduce crime and social disorder is to get the cooperation and active assistance of the public. Moreover, it must be done on a large scale and utilizing a wide range of approaches,” Moncherry said.

Moncherry, too, called on the community to assist in arresting crime, stating boldly that the police cannot do it alone, and that the time has come to distinguish between crime-fighting and crime prevention.

The top cop said the difference between crime-fighting and crime prevention was quite clear in that crime-fighting is a series of measures and actions taken by the forces of law to combat crime, actions that are reactive; while crime prevention is the anticipation, recognition and appraisal of a crime risk and the initiation of action to remove it.

“This notwithstanding, I should point out that the police are tagged with the responsibility of protecting citizens or visitors no matter where they choose to live, recreate or socialize. The time has come for there to be a scientific approach to crime prevention. Whereas crime is a problem, it is only a subset of a bigger problem. The bigger problem must be identified and dealt with,” Moncherry said.

He also called for a moving away from the blame game to partnership and action, noting that while there are challenges in relation to resources, “we need to move away from burying our heads in the sand and complaining of lack of resources all the time.”

“I do need resources and can do with a lot more resources right now. One homicide should be of concern to any Commissioner of Police, far less 54. The records show that most of those homicides may have been as a result of, but not limited to, lack of anger management, absence of proper conflict resolution and the proliferation of guns in St. Lucia,” Moncherry said, adding that were it not for interventions by lawmen, the homicide rate would be higher.

Guy Joseph, who also spoke at the symposium, deputizing for Prime Minister Allen Chastanet, pointed to the little things in society that are not corrected as the starting-point in the making of a criminal or lawlessness in the country.

Respect, he said, is of little value and that young people today do not respect authority. He also referred to the tolerance of obscenity in everyday dealings.

“Obscene language has become the order of the day and almost become an acceptable part of the vocabulary in St. Lucia. We tolerate and accept these things as if they are nothing,” Joseph said, also calling on the police to deal with the lawlessness on the country’s roads.

“We need to go outside the normal way of doing things and find creative ways to address some of the concerns that we have,” he said.