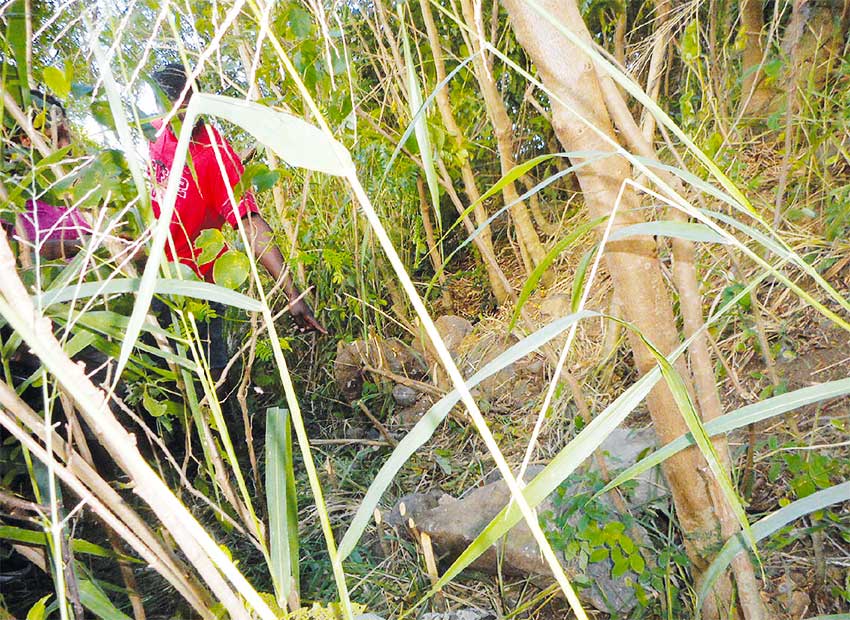 AS of yesterday morning, two men were in custody assisting police with their investigations into the brutal murder of a Laborie woman whose battered body was found on Saturday morning in a shallow grave covered with stones.

The body of Saadia Byron, 32, of Black Bay, was discovered by her relatives who were part of a search party, which included police officers and residents of the community. The grisly discovery was made about 30 metres from her home, which is located in an isolated area in Black Bay.

The men assisting police with their investigations into the incident are well-known by Saadia’s family.

The day before she was reported missing, Saadia was due to graduate at a skills training workshop in Laborie.

In an interview with this reporter a few hours before the gruesome discovery, her mother, Georginia Byron, said she believes that her daughter was dead.

According to the grieving mother, on Thursday, sometime around 8:00 p.m. on the day she was reported missing, Saadia spoke to a relative via her cell phone, saying that she was on board a minibus coming from Vieux Fort heading towards Laborie.

She said the following day, not too far from their home, a used condom, a stone, human faeces and her daughter’s underwear were discovered in some bushes.

According to Byron, her daughter has for some time now been stalked by a man (name mentioned) who would grab her hands whenever he meets her on the road leading to her home. She added that the matter was reported to the police but they did nothing about it.

The man is one of those in custody assisting police with their investigations into the matter.

At the scene of the crime, emotions ran high as residents expressed anger at the incident which has left the closely-knit community in shock and disbelief. They described the killer as heartless and deserving of the gallows.

Denver Eugene, Saadia’s cousin, who made the grisly discovery, said before he saw the grave, he saw the nylon bag of groceries Saadia was carrying on the day of her demise.

“When we reached a certain place, we saw stones removed and piled up and like somebody was dragged…When I looked through the stones, I saw the body,” he said.

Saadia’s brother, Chris Byron, who earlier had to be taken to hospital after he collapsed as he struggled to cope with the harsh reality, said he is a bit relieved now that his sister’s body was found but wants to see justice take its course.

Meanwhile, Assistant Commissioner of Police in charge of crime management, George Nicholas, declined to give details about the two men assisting police with their investigation into the matter.

He said it was too early to make a connection between the men and the incident, adding that they are continuing their investigations into the matter.

Family members and residents described the deceased as a very quiet person who would do harm to no one.

Byron’s death brings to 51 the number of homicides recorded this year.