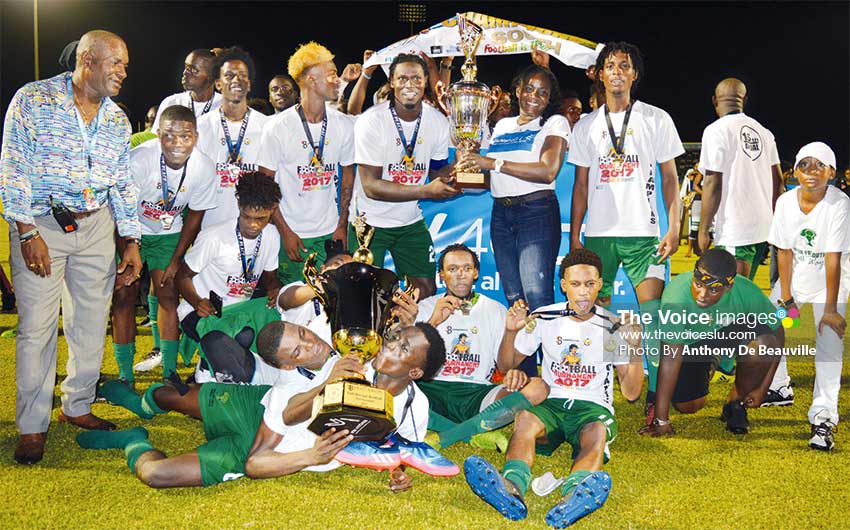 IT was a carnival atmosphere at the Daren Sammy Cricket Ground on Saturday evening as defending champions Vieux Fort South defeated Canaries 3-nil in the Blackheart Knockout tournament finals.

Vieux Fort South dominated the proceedings despite the first half been locked at nil-all. With a crowd of close to 4500 in attendance, the second half of play saw VFS’s Antonius Myers scoring in the 50th minute.

VFS coach, Emmanuel Belasse, quickly made a substitution, bringing in striker Noah Nicholas for Jervic Mc Farlane in the 52nd minute while Canaries substituted David Henry for Robert Regis in the 57th minute.

In the 78th minute, Antonius Joseph extended VFS’s lead when he got one past national goalkeeper Quami Jones. At that point, the party had begun in the VFS section with drums beating, horns blowing and fans jumping up. One minute later, VFS Dwayne Charles was shown a red card for dissent to referee Andrew Phillip.

Canaries had their scoring opportunities but failed to capitalize as VFS’s defense stood tall, especially their goalkeeper, Vino Barclette, a goal medal winner with team Saint Lucia at the Commonwealth Youth Games in the Bahamas.

With six minutes left on the clock and 10 men on the pitch, VFS substitute Noah Nicholas scored in the 84th minute, sending the VFS crowd wild.

For the third place silverware, Gros Islet secured victory with a hat trick by Troy Greenidge. Greenidge continued his scoring prowess against Marchand who never looked a shadow of their usual selves.

Marchand opened the scoring with Andrus Remy in the 10th minute. However, Gros Islet, with their usual crowd support behind them, quickly regrouped and got the equalizer through Daniel Dannis in the 28th minute. Troy Greenidge made it 3-1 with two quick strikes in the 32nd and 37th minutes while Brandon Eugene pulled one back for Marchand in the 41th minute to end the half 3-1 in favour of Gros Islet.

On the resumption, both teams simply worked the ball through the midfield area, hoping to catch their opponent flatfooted in attacking mode. With time running out, there was one final buzz from Troy Greenidge in the 87th minute to seal victory.

According to organizers, the presentation of prizes, including the winner’s cheque and other awards — including Best Goalkeeper, Player with the Most Goals, Best Youth Player — will be presented at an official prize-giving ceremony in the coming days.