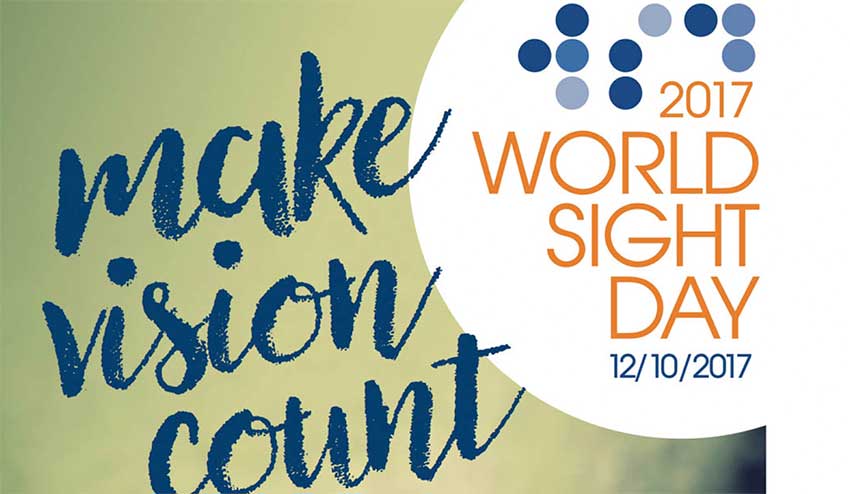 PRESS RELEASE – THE Ophthalmological Society of the West Indies (OSWI) joined the rest of the world in commemorating World Sight Day (WSD) on Thursday, October 12.

World Sight Day is an international day of awareness, held annually on the second Thursday of October, to focus attention on the global issue of avoidable blindness and visual impairment. The theme of World Sight Day 2017 (WSD17) is “Universal Eye Health”.

This event is coordinated by the International Agency for the Prevention of Blindness (IAPB) under the VISION2020 Global Initiative. Each year, however, there is a focus on a ‘Call to Action’, and for 2017 it is “Make Vision Count”.

According to the WHO, approximately 285 million people worldwide (4.24%) live with low vision and blindness. Of these, 39 million (0.58%) are blind and the remainder have moderate or severe visual impairment (MSVI). Significantly, 80% of visual impairment is readily treatable and/or preventable. Restoration of sight, and blindness prevention strategies are among the most cost-effective interventions in health care.

In the LAC regions combined, there was an estimated 2.3 million blind and 14.1 million with MSVI in 2010. In 2010, cataract continued to contribute the largest proportion of blindness, except in Southern Latin America where macular degeneration is most common.

According to OSWI President, Dr. Barker, “It is important for all countries in the CARICOM to embrace this call to action and continue with the regional partnership to eliminate blindness. OSWI has been playing a pivotal role in education and research of eye and vision disorders, and in the practices of Ophthalmology.

“In our last conference in July 2017, a team of visiting ophthalmologists from the Caribbean conducted two corneal transplants and a number of other surgical procedures, including silicone oil removals, cataract extractions and diabetic laser on patients at the Georgetown Public Hospital’s Eye Clinic.”

Dr. Barker further stated that: “OSWI will continue to do their part in working together in making vision count within the region. The Caribbean membership of OSWI has already organized a series of lectures, press releases, media interviews, patient visits, education series as well as social media marketing to ensure that everyone is sensitized to the valuable messages for World Sight Day.”