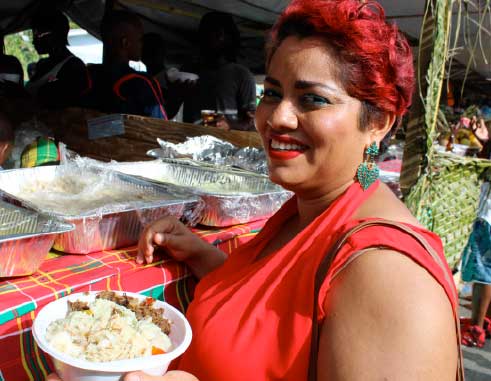 Held in Saint Lucia over the past three decades, JounenKwéyòl creates the bridging of generations past and present, inherently educating Saint Lucians on how important the past plays a critical role on informing and enhancing the present.

Many braved the blistering Sunday heat to partake in the festivities – food, fun, exhibitions, singing, dancing and demonstrations of traditional practices — such as farine making, woodcutting, and bread-making. Others, however, waited until the afternoon heat subsided before taking in the activities.

The VOICE caught up with Minister for Culture, Fortunea Belrose, in Mabouya Valley (Dennery). Belrose said preparations for this year’s event were underway long before Sunday and that feedback was that people enjoyed the event. She believes the event plays an important role in Saint Lucian society.

“I believe that JounenKwéyòl teaches us how things used to be in the past so that we appreciate how to move forward,” Belrose said.

The Creole weekend began on Friday with VendrediKwéyòl (Creole Friday) with schools, business-places and members of the public setting the tone with their creole threads; some choosing to wear the madras, others choosing African prints.

On Saturday evening, Babonneau got a head-start by treating patrons to a sneak peek of what was to come on Sunday. Hundreds of patrons filled the stretch of road leading from the Babonneau Multi-Purpose Centre to the Seventh-Day Adventist (Church of God) as cultural presentations were made on the stage set up on the road.

Meanwhile, while some patrons gave this year’s Jounen Kwéyòl a passing grade, others felt organizations need to do more in terms of showcasing traditional aspects of saint Lucian life as opposed to the heavy emphasis of commercialism.