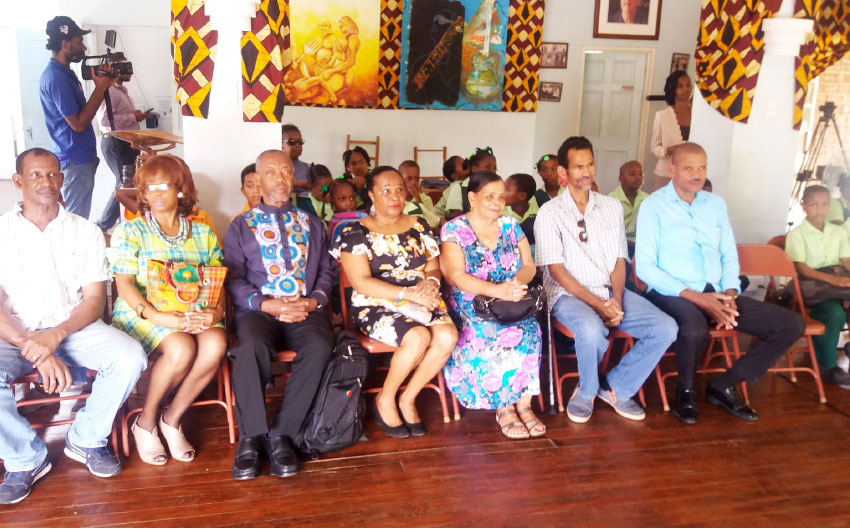 THE life of one of St. Lucia’s most beloved sons was celebrated on his birthday earlier this week during the time of year that he loved the most.

Sir Dunstan St. Omer, who would have turned 90 last Wednesday, died on May 5, 2015. However, a close friend of the late artist/cultural icon says Sir Dunstan lives on through his work and legacy.

To commemorate his life with celebration, the Msgr. Patrick Anthony Folk Research Centre hosted an activity at which primary school children were invited to hear about the icon, see some of his work and meet members of his family.

He said: “He is such a fantastic icon for us, but for me, what I really celebrate about Dunstan is that he always passed on (what he knew). He taught at the St. Mary’s College, he taught in other schools, he became the Director of Art in schools and he taught the teachers at Training College to do art so they could pass art on in turn. Today, it’s almost incarnate in the flesh of his children. His sons have continued the same tradition, so he’s a tremendous St. Lucian!”

Monsignor Anthony explained how Sir Dunstan influenced local culture, history and heritage in numerous ways with minimal training and through sheer genius, as well as with the influence of another local icon, Harold Simmons.

Also present at the birthday celebration was the first son of the beloved icon, Alwyn St. Omer, who said he was beyond pleased with the FRC’s efforts.

“It’s so apt that it’s in the middle of Creole Month because Daddy so loved St. Lucia and everything St. Lucian,” St. Omer said. “He had an uncanny love for St. Lucia…When you’re growing up in a house with Sir Dunstan, going to the beach was like a love affair…you know, he’d see something in the colours and everything was so beautiful.”

St. Omer, who is a well-renowned artist and writer himself, likened his father to a giant who came from an era of giants, including Harold Simmons, Sir Derek Walcott and Hunter J. Francois. They came out of colonialism, he said, and fought for their own identity in a bid to dispel the ghost of slavery.

FRC Executive Director, Hilary La Force, said: “It is an honour for us to continue to revere this gentleman who has done quite a lot for his country and put us on the map. His name will be etched in our history. Once you look at the flag, Dunstan St. Omer comes to mind as one of the greatest sons of the soil.”

Sir Dunstan was honoured by the FRC in 2007 as a National Cultural Hero and in 2010 when he was knighted by Queen Elizabeth II as an international artist.
Of the many things the icon will be remembered for, perhaps the most important will be designing the national flag of St. Lucia.