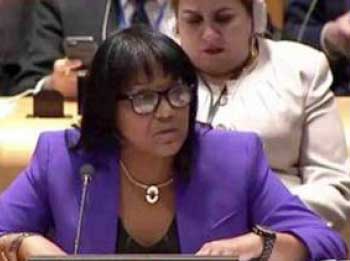 (UNITED NATIONS) – On October 2, Cuba presented some of its achievements in education, health and social inclusion and recalled that these have been attained despite the U.S. blockade against the island in force for more than half a century.

“This criminal policy causes damages and scarcities for the Cuban people, is the main obstacle to the development of our country, affects other nations because of its extraterritorial reach, and continues to harm the interests of U.S. citizens and companies,” stated Ambassador Anayansi Rodríguez.

Speaking to the Third Committee of the General Assembly, Cuba’s Permanent Representative to the UN denounced the current U.S. administration’s plans to tighten the economic, commercial and financial blockade, which has been repeatedly condemned by the international community.

According to Rodríguez, despite Washington’s sanctions, Cuba is advancing in the implementation of the 2030 Agenda for Sustainable Development, with the moral strength of having fulfilled the Millennium Development Goals.

In this regard, she highlighted that Cuba reached an infant mortality rate of 4.1 per 1,000 live births at the end of the first half of 2017, one of the lowest rates in the world, while life expectancy at birth stands at 78 years.

Cuba was also the first country to eliminate mother-child transmission of HIV-AIDS and congenital syphilis, she added.

The Cuban ambassador also recalled that a free universal vaccination programme is in place on the island against 13 diseases, the country is illiteracy free, and the state allocates more than two- thirds of its budget to education, health, social security, culture, sports and scientific research.

Rodríguez also noted Cuba’s satisfaction on having cooperated with other nations in various sectors.