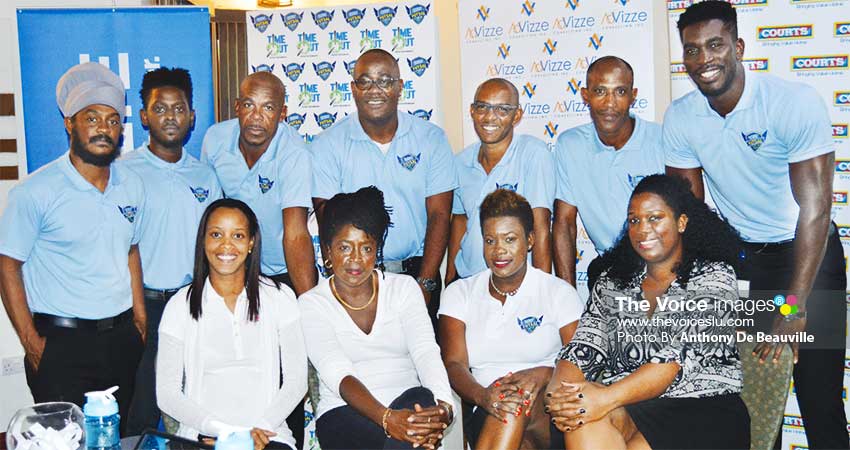 THE team at Time Out Entertainment has officially announced the twenty-four corporate teams taking part in the 3rd Annual Corporate Warfare Futsal Competition. The indoor football action already popular around the world, especially in Latin American countries, is taking off in Saint Lucia in a huge way to the delight of the team members.

At the official media launch hosted by St. James’s Morgan Bay Club this week, Match MC Ezra “DeFunMachine” Augustin, managed the proceedings and facilitated the live draw which determined the groups. The officials and host expressed gratitude to organisers and reaffirmed their commitment to assisting in the staging of this event for years to come.

“Futsal matches are shorter and require less players for a quicker turn-around time and, as such, we decided to utilize this form of football to promote healthy living, camaraderie among team members and foster a networking environment in a more social arena,” John said.

The organisers have marvelled at the success of the competition which has been growing from strength to strength, learning from its challenges each year. Gold sponsors of the event this year are Guinness, Courts, Climax, St. James’s Club Morgan Bay, Flow and AdVizze Consulting Inc.

When asked about their participation and sponsorship of the event, the main sponsors praised the organizing committee spearheaded by Time Out Entertainment with some advice for the teams and wider public to participate, sponsor and be part of the best corporate meeting ever staged in St. Lucia.

OECS Marketing Supervisor for Unicomer, Melissa Marius, said the company is proud to be part of such a growing event and reminded the teams present that, “You can have fun but remember that on the court, we are all representing a brand and must ensure we project that sense of pride and camaraderie at all times.”

Brand Manager for Guinness, Rohan Lovence, echoed the sentiment of the other speakers and added, “We are proud to be supporting this initiative from its inception three years ago and are extremely impressed with the innovative product which has placed corporate football on a different level, generating a sense of brotherhood in an infectious atmosphere on game nights.”

The results of the team groupings followed, with the official kick-off date of Wednesday, October 25, from 6:00 p.m. at the Beausejour Indoor Facility. All teams are expected to be present for the proceeding march past and the start of the season which will last for 6 weeks, culminating in the grand finale to ultimately crown the Futsal Champion 2017.