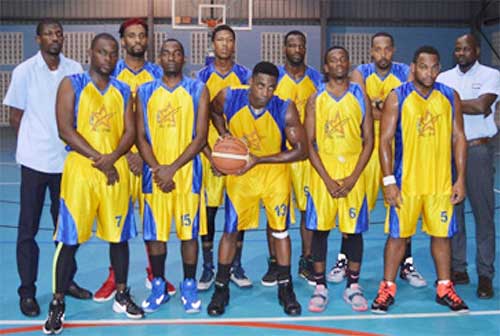 THE fanfare and friendly rivalry continue tomorrow evening and Saturday when the Saint Lucia Basketball Association stages the quarterfinal round of the 2017 KFC Commercial Basketball Tournament with four exciting matches at the Beausejour Indoor Practice Facility.

The two matches are expected to be keenly contested, especially the Goddard Group/PCD and Media matchup. The former has the edge as a well-organized unit and with such players like brothers Troy and Andre Louison in their starting lineup and the depth on the bench, they will be a hard nut to crack.

The Media team, on the other hand, will have to put their house in order in this all-important matchup and also keep their fingers crossed that their players arrive at the BIPF for the scheduled 7.30 p.m. start. The dependable Paul Hippolyte will have to stay out of foul trouble and the possible return of Kc Aurelien and more consistent scoring from Arthur Tisson from the free throw line could make a vast difference.

On Saturday, WASCO will play the Fire Service from 7:00 p.m and Sandals take on Group B leaders CSA at 8:00 p.m. with Keegan Mortley and Ron Dumurville on its roster.

The semifinals will be played on Saturday, October 14 at the BIPF.

Combined Forces held on to a 4-point lead at the end of the first quarter (20-16), thanks to Amil Octave, who made life somewhat difficult for the Media team with his athletic prowess. It was a ding dong battle in the second quarter, but the RSLPF managed to pull away slightly at the end of the first half with a 7-point advantage (36-23).

Going into the third, the RSLPF stepped on the gas as they outplayed Media in all facets of the game to lead by 16 (54-38).

In the final quarter, it was all even, with the RSLPF scoring 15 points to Media’s 14 points. But the damage was already done in the third quarter and it was difficult for the Media team to come back into the game.

For Combined Forces, Amil Octave led the way with 23 points, 4 assists and 6 rebounds.

The encounter between WASCO and Digicel did not take place as the latter did not show up.

Financial All Stars had the better of Lewis Industries 71-45. The KFC player of the game was Marlon Samuel (35 points, 12 rebounds and 6 steals).

Meanwhile, players of the various commercial houses and members of the public coming to the showpiece are advised that the entrance fee has increased to $10. Proceeds at the upcoming games will go towards past and present players in need of financial assistance for medical treatments.

Players of teams not in the quarters who wish to attend the games are asked to contribute to this initiative by making your contribution at the entrance. For the teams participating in the playoffs, please note that admission for persons accompanying you is NOT free.