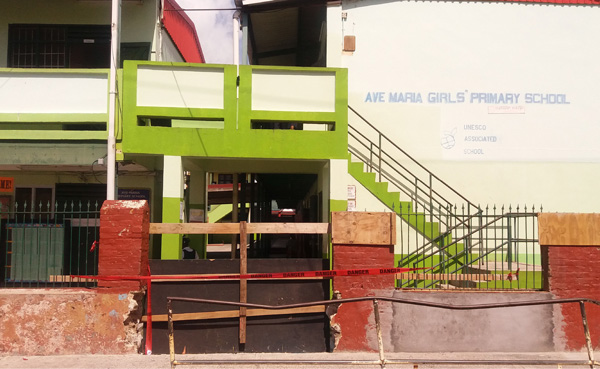 Sponsored
Share this post:
As teachers and students in schools across the island were on their way to settling into the new school year, one school is going through a series of tough breaks, which has given them a not-so-happy start.

Principal of Ave Maria Girls Primary School, Valerie St. Helene-Henry, told The VOICE yesterday that in the past few weeks, the school has suffered a number of setbacks, which have now led to drastic measures being taken for the sake of both students and teachers.

St. Helene-Henry made a desperate call for greater security measures to be implemented in and around the school compound after an incident on Sunday night led to teachers and the school’s security guard being debriefed.

The incident involved a shootout between police and an armed assailant, leading to the perpetrator being shot by the police on the school’s compound. This came after the assailant tried to evade capture by scaling a wall and jumping into the school.

St. Helene-Henry said this was not the news that any school principal wants to hear on the night before school is due to reopen after the summer holidays. What made matters even worse, she said, was there were teachers on the compound preparing for classes the next day when the incident occurred around 9:00 p.m.

Teachers were left in shock and hysterics, leading to them being debriefed on Monday morning by the District Counsellor.

St. Helene-Henry said: “We are very concerned about this school being in the middle of the city and the conversation we’ve had with the police. We are not safe and I mean anything can happen.”

She continued: “It has happened before where other members of the public would run after somebody they’re in trouble with and they would run into the school. We’ve had to do what we call a lockdown and it can happen during school time.”

The principal said she was especially concerned when shots were exchanged between assailant and officers, saying she dreads the thought of this happening during the day with students present.

She said: “The lives of the children, the teachers, even the watchman; he was right there and said the gunman ran past him. So his life, too, everybody working here, our lives are at stake.”

Tighter security from authorities and higher walls are desperately needed, she said, especially in these perilous times.
As if this was not enough for the principal to deal with, parents are left with no choice but to mind their children for one more week as students are due to continue the rest of their first week at home.

This was a collective decision between the school’s two principals, as well as the Chief Education Officer.

St. Helene-Henry said teachers and principals came together during the school holidays to make all possible preparations for the new school year. However, while they did all that they could, the maintenance work that was needed on the higher level was not undertaken until there were only two more weeks for the school to be reopened.

Some of the work included rebuilding of staircases and other cement works, as well as the removal of termites with the use of pesticides. Because of the poor timing of these works, she revealed that some students and teachers alike had adverse reactions due to the fumes and dust. There is also the glaring problem of the primary school’s main gate, which is missing and has been replaced with a makeshift barrier.

The exasperated principal said: “We looked at a number of concerns and issues and we decided together that we are taking one week for the children to stay home so that whatever works can be done, gets done. It’s not going to be all the works but the major parts of it can be done and that will also be enough time for the school to get a deep cleaning with pressure washes, etc., to clean all the furniture and air.”

She added: “What we’re breathing is not so good. Some of the teachers have sinus and asthma problems and we also have the children to mind. So we had to come together to take that decision.”

The teachers, she said, will continue to work together to ensure that the school is ready by next Monday.