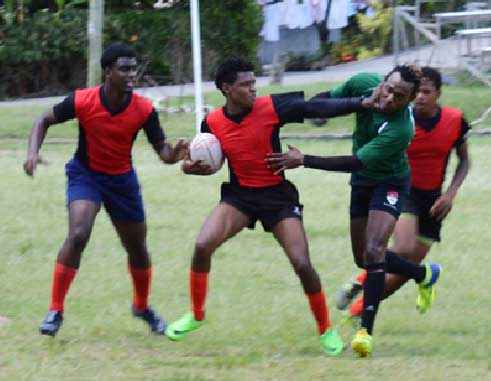 Despite a no-show by Soufriere Lions team and the matches for the female teams being postponed to this weekend, three participating teams — Rogues, VBCC Stingers and Whiptail Warriors – were present, with Rogues continuing their unbeaten run.

The five member VBCC Stingers, which included SLRFU president Roger Butcher, found the going challenging due to the scorching heat in both of their matches as they failed to trouble the statistician. But Stingers must be commended for their brave effort despite playing two players short.

Whiptail Warriors, who took the field with six players, gave Rogues a good run for their money with two tries, one from debutant, Larry Eugene and the other from Dwayne Nathaniel. Their efforts were complemented by the junior male rugby player for 2016, Tyrese Samuels, who secured the two conversions at either end of the pitch.

Led by Jerry Charles, the Rogues team remained undefeated for the second time in as many outings as they whipped VBCC Stingers 29-0, but got some resistance from Whiptail Warriors whom they defeated 28-14 at the end.

The SLRFU train will whistle its way to Dennery playing field this Sunday for the third leg of the series.

Butcher spoke to The VOICE about the outcome of the series thus far and upcoming overseas engagements.

“The games were fairly well contested. All the teams gave good accounts of themselves. The Community 7s series is a first step to select players to represent Saint Lucia. Secondly, our objective is to attract new players to the sport as the event is short and exciting,” he said.

“In terms of overseas engagements, we intend to go to Mexico for a 7-per-side tournament or travel to Barbados for a regional tournament. As you are aware, rugby is now part of the Olympic family,” he added.

Butcher said finances have been hard to come by but support comes from the SLOC, government and the private sector. The hope is for the Union to raise funds the Mexico in order to qualify for participation in the Commonwealth Games in Australia in 2018.

“A number of countries within our region do get top-level international exposure. Unfortunately, we have not been able to reach that mark, so we are trying to take it a step at a time. Our plan is to tackle tournaments regionally and then step up to international qualifiers and, hopefully, get into the big leagues,” he told The VOICE.