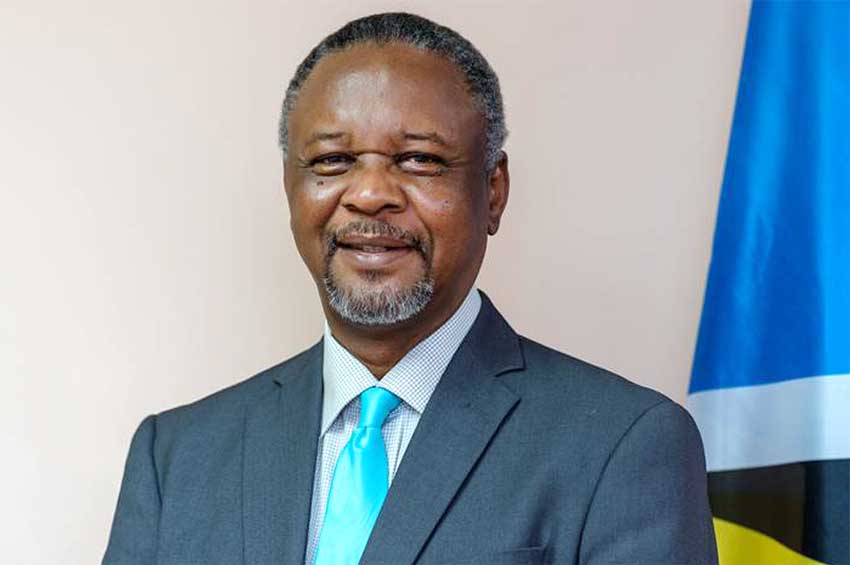 HERMANGILD Francis is calling on the officers of the Royal St. Lucia Police Force to come out of hiding from the controversial IMPACS Report and get back to work on restoring confidence in St. Lucia.

In an interview with The VOICE yesterday, the Minister for Home Affairs, Justice and National Security spoke candidly on the matter of Operation Restore Confidence (ORC).

ORC is recorded as one of the most controversial moves made by the Stephenson King administration between 2010 and 2011 and saw the killing of 12 people by police officers. What followed were sanctions being slapped on the island by the United States, with a spike in violent crimes and homicides, resulting in citizens calling for it to be restored.

On this matter, Francis said he is very passionate because there is a definite and desperate need for the restoration of confidence on the island. However, the lingering effects of the first ORC has reduced the police force to a shadow of its former self and dealt a massive blow to the Force’s morale.

On the other hand, he said this is no excuse.

Francis said: “What I’ve always told the police is that every time you do an operation, there will be praise and criticism and what you need to do is to take a post-mortem. After that, even if you have done the job well, there is always a need for improvement. So, maybe it was done badly (and) we will learn from the experience. But that does not give police officers (cause) to say that because the IMPACS report is there, we cannot perform our duties. They are still getting paid!”

Francis had harsh words to say about officers who deliberately fail to carry out their duties. “I know there are several persons who are involved in it and these guys are giving you yeoman service. Others have pulled back and if I was the Commissioner, I would have taken action against some of those persons already because at the end of the day, you’re getting paid.”

He continued: “You may not want to get involved in the actual doing but you have the information and intelligence that you can share because, you know, most of them know the criminals, so they can share (that information) with other police officers. I don’t buy the fact that because of the IMPACS report, that they’re so hamstrung that they cannot perform.”

Francis stated that restoring confidence should be a daily exercise that leaves citizens feeling safe and confident everyday. Should this be done, he said, the public will feel more comfortable and inclined to open up to police and provide the much-needed help to solve crime.

When it comes to tackling the criminals themselves, Francis said the names, activities and whereabouts of said individuals are known to the police; however, nothing much is being done to bring them to justice.

“You need to make these guys’ lives miserable! You are there everyday and every minute. They can’t breathe and they have to move. By moving, then their location is different, they will make the mistake and they will be caught,” he said.

The same, he said, applies for individuals who see crime taking place but refuse to report them. He said that in an age of technology, fear of confidentiality breach is a non-issue as information and footage can reach the police without the identity of the senders.

Francis said the judiciary must play their role as well. Giving one example, the Minister said an individual was caught with almost 30 car keys, leading police to believe that he played a major role in the recent spate of car theft which involving vehicles being stripped of their parts and incinerated.

Francis said: “He was just charged and released. This guy should have been at Bordelais (but) he is back out there. It has to be a holistic approach from the executive, the judiciary and the police.”

The Minister recently made headlines after he was challenged for saying that the death penalty needs to be revived. In response to this, he said: “Persons have always said the death penalty is not a deterrent. I’ve told them that is not my business! It is on the law books that with capital murder, you can be sentenced to death. We need to make an example of this.”

He made reference to last week’s police shooting where a plain-clothed police officer was involved in an afternoon shootout with an armed assailant on Grass Street in Castries.

“Police officers, our judicial law officers and our security officers are the wall between good and bad and if persons are going to try to tear down that wall, then what is our defence? That is why persons made capital punishment available.

“There are categories of persons who fall into that: a judge, a police officer in his execution of his duty, a prison officer. Those persons, if you kill them, automatically you can be charged for capital murder. It is not because these people are more people than other persons; it’s because that is our institution and if you’re going to damage our institution, then there is obviously no law and order.”

Francis refuted arguments that the British will be against the decision and will refuse to give assistance where needed. He highlighted the case where seven death row prisoners were hung in Trinidad in one day. This case, he said, was extremely powerful and effective, so the argument of the death penalty not serving as a deterrent is unfounded.

He said this is not a case of him wanting the death penalty to be revived: it is the law and if one does not wish it to be law, they should get the government to strike it from the law books.

Francis said the lack of police action only breeds vigilantism, as people are fed up. The police, he said, have no excuse as his ministry is slowly but surely providing them with the resources needed to carry out their duties, including new vehicles, renovated facilities and new police stations.

He said: “I used to be a police officer, so I’m sympathetic with the police. But at the same time, I know what we used to do with the limited amount of resources that we had and right now, I think they have the intelligence, the smart phones and the gadgets, so they need to be able to do something better.”