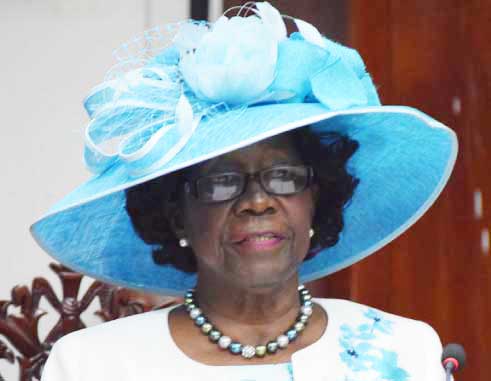 FOR the past twenty years, Dame CalliopaPearletteLouisy has undoubtedly served Saint Lucia in high esteem as the island’s Governor General. The first woman to serve in that post has unquestionably become the best ever to have done so.

Since taking up the offer to serve as the nation’s Head of State in September 1997, Dame Pearlette, a career educator and professional linguist by trade, had already racked up numerous accolades. Having served in top positions at Sir Arthur Lewis Community College (SALCC), the career shift must have been uncomfortable for someone who is hardly known for her politics.

Over the years, however, the woman whom it is said went to school barefoot in her home village of Laborie and scaled the heights of academia, found herself slowly embodying the Saint Lucianness that many hitherto felt ashamed to embrace, including the creole language. In fact, among her first orders of business was making creole a permanent fixture of the House of Assembly as part of the Throne Speeches she delivered flawlessly throughout the years.

A champion for many causes, it is not uncommon that her duties find her days and nights packed, especially during Nobel Laureate Week, which she has revitalized over the years, her having been a patron of the event that has now become a festival.

Always affable, eloquent and willing to serve her nation at the highest level, Dame Pearlette has become one of the metaphors for the Saint Lucian dream: that it matters not from what circumstance one came but, rather, where they intend to go and what they intend to achieve. She has also demonstrated that sometimes the protocol dictates that protocol should not alienate. That is why during her tenure she has made it her duty in ensuring that Government House is now more accessible to the public than ever before.

As Dame Pearlette celebrates her twentieth year in the post, during which administrations have come and left, her shining example as a leader needs to be underscored. In a nation where scandals, political divisiveness and inconsistency are the norm, she has proven that hard work, determination and a willingness to serve unwaveringly can turn yesterday’s dream into tomorrow’s reality.

Time alone dictates just when she does leave the post. However, having created what seems to have been the perfect blueprint for what excellent service should be, her successor might definitely want to rethink whether they are up to par to take up the mantle.

For now, though, congratulations to Dame PearletteLouisy for a job well done over the past two decades and may she continue to inspire.