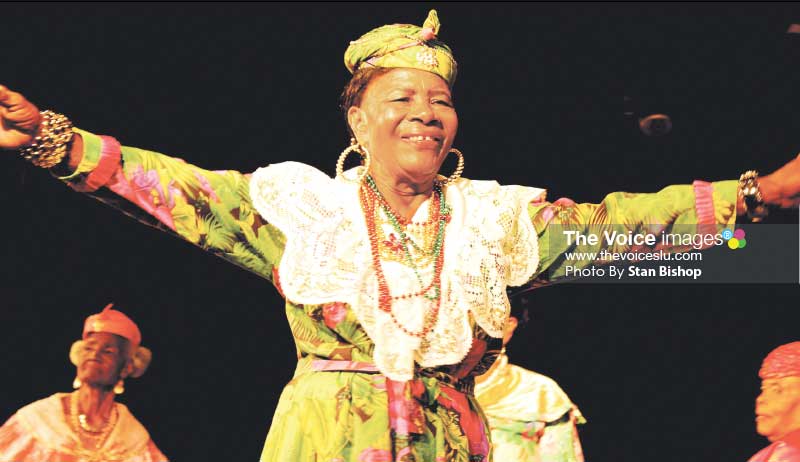 AGE, they say, is nothing but a number. However, numbers do add up and when they do, the results can be priceless. That’s just what happened last Sunday when Helpage Saint Lucia and the National Council Of and For Older Persons (NCOP) staged its Golden Pageant – dubbed “Miss 60+ Elegance At Its Best” – at the National Cultural Centre (NCC).

Five contestants provided the modest audience with their rich and varied display of talent, finesse and wisdom in their quest for the coveted shiny tiara and – most importantly – to prove that they still have what it takes to be a star.

Seventy-four-year-old Monchy resident, Julia Mathurin, walked away with the title when the Council Of and For Older Persons held its Golden Pageant – “Elegance At Its Best” – at the National Cultural Centre (NCC) on Sunday. Mathurin also captured the Best Talent award.

Scores of patrons turned up for the thrilling event which saw five contestants prove that not only is age nothing but a number – but that their talents and messages still shine and can still inspire, motivate and change a society.

The other two contestants were Martina Mitchell, 67, of Canaries and Catherinette Ernest, 73, of Mabouya Valley (she won Most Photogenic).

Interspersed with guest performances from Secondary School Calypso monarch Mighty J, the Flamboyant Dancers, and Major Tone Band, the show sought to demonstrate that seniors should not be pushed aside.

In fact, in his brief remarks at the beginning of the show, President of NCOP, Peter Fevriere, said that when asked to explain why his Council felt the need to host the pageant, finding an explanation was simple.

“I think it’s important because older persons are examples for the nation,” he said. People who are 60 years old and older have set the pace and blazed the trail for the younger generation. They achieve all these things because they are blessed with certain gifts and have talents.”

Fevriere argued that the talents that have been bestowed on people should be utilized only for a fleeting moment – for example, in their youthful days – and then discarded in their retirement age.

“A talent that is given is one that is supposed to be heralded your entire life,” he said. “A talent is meant to enhance God’s creation, inspire God’s people, to encourage those weak among us and those who are lost.”

Fevriere said that aside from caring for the elderly, such as ensuring that they are fed, in good health, secured in their homes and not abused and ostracized, “we have to find opportunities where they could express their God-given talent to inspire and encourage the younger generation. We have to honour, respect and uplift the elderly.”

The audience, made up of both young and old, seemed appreciative – and at times flabbergasted – that the contestants were able to combine and maintain eloquence, wit, charm, grace and confidence throughout the show despite many of them being first-timers to the stage.

Despite their superlative attributes, though, the contestants might be best remembered for the positive messages they delivered through their promotional speeches and during the interview segment, most of which centred on their concerns for the youth. It’s something Fevriere noted in his remarks.

“If we have a talent that we cherish, we must be willing to share it with the young,” Fevrier said. “As you look around these days, you will see our youths are wounded, hurt and in a state of despair. It is up to us who have lived (a long life) and know better to show them how to live and do things differently.”

Moreover, with October 1 designated by the United Nations as International Day of Older Persons, the pageant served to celebrate the journeys and contributions of people who would have spent their lives nurturing many (for example, Sidonia Joseph, who has no children of her own, raised 25).

This year, International Day of Older Persons is being held under the theme, “Stepping into the Future: Tapping the Talents, Contributions and Participation of Older Persons in Society”, and last Sunday’s show fit the theme perfectly. So much so that even Governor General, Dame Pearlette Louisy, seemed impressed by the remarkable talent displayed by the contestants.

One of the organizers, Helen Charles, told The VOICE that she was pleased that contestants enjoyed themselves. Charles also thanked everyone who supported the event, which has been held annually for the past two decades.

Charles said that while many attempts have been made to include a Club 60+ King Pageant, such an endeavour has proved futile as men still seem unwilling to come forward and showcase their talent.