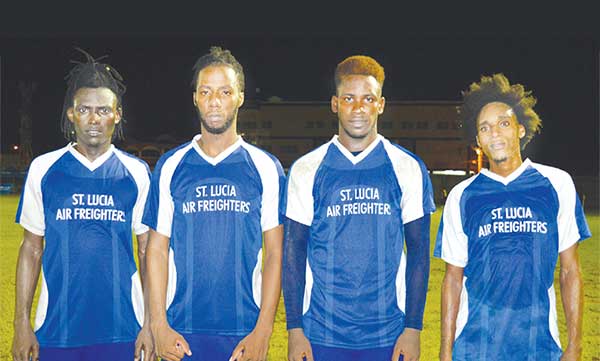 FOUR former champions — Mabouya Valley, Canaries, Micoud and Gros Islet — along with defending champions Vieux Fort South have booked their tickets to the quarterfinal round of the Blackheart Knockout Football Tournament.

The sporting entertainment continues today at the Soufriere Mini Stadium with the final two matches of the first round. From 6:30 p.m., Marchand will take on Babonneau and La Clery play Anse la Raye at 8:30 p.m.

Tomorrow, at the same venue, the first set of matches in the quarterfinal round begins from 6:30 p.m. with Gros Islet playing Central Castries. At 8:30 p.m., it’s the battle of two former champions as Canaries will take on Mabouya Valley.

Meanwhile, in Wednesday evening’s game between Gros Islet and Soufriere, Troy Greenidge scored in the 14th minute, Amaris Lorde in the 34th and Melvin Doxilly in the 43rd to leave the score-line 3-0 at halftime.

Soufriere by then was hoping that the changes would have at least seen some added pressure on the Gros Islet defense. But that was not to be. In fact, Coach Francis later replaced Duval Edward with Parker Gaston.

By then, Gros Islet had already switched into high gear as Elijah Louis’s strike in the 88th minute put the issue beyond Soufriere’s reach.

In the second game of the evening, Micoud came up against Laborie. In epic fashion, Laborie opened the scoring with a well-taken half volley from Dornan Edward in the 5th minute to start a celebration. Two minutes later, the celebration was cut short as Levi Altidore equalized for Micoud.

Two quick strikes from Shane Paul in the 13th and 26th minutes silenced the Laborie supporters going into the halftime with the score 3-1.

Both teams up the tempo a few notches and in so doing missed a combined 5 scoring chances. Laborie went hard at Micoud and with added pressure, Micoud’s Andre Joseph, in an attempt to clear the ball, scored an own goal on Noah Didier in the 85th minute to make it 3-2.