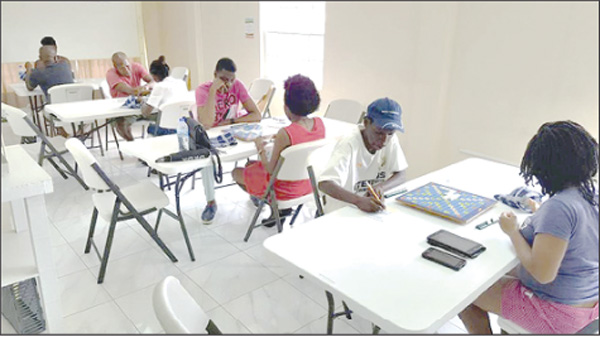 Along with the winner’s trophy, Joseph received a monetary prize, footwear courtesy Modern Fashions in Vieux Fort and a customized certificate of his achievement.

A retired banker and former cycling champion, Joseph is as sharp as they get. His wizardry on the board is legendary. He belongs to the loose assembly of scrabble players in the South, referred to as the WEB!

Having to settle for second place was Micoud native, Ulric Joseph who, despite being defeated by Rene Joseph (no relation) proved a formidable opponent and one to definitely be watched in the future. Ulric is an avid scrabble player who, when not engaged in such pursuits of the mind, plays basketball and even represents Micoud in the game.

A firefighter by profession, Serieux is a former scrabble champion who began playing the game as a child at the Mon Repos Primary School where he played with his teachers. He is also associated with the PYO Players and has participated in regional friendlies, notably in Trinidad.

Second and third place winners were recipients of cash prizes and customized certificates of their achievements.

Although the tournament saw the more seasoned players rise to the top, there was participation from a cross-section of less experienced but extremely promising and seemingly committed younger players.

Superior Outcomes Learning Centre looks forward to their continued participation and hopes that the institution could become a Centre of Excellence and a home for the game of Scrabble, as well as for other human enrichment activities.