By the Jamaica/Saint Lucia Community 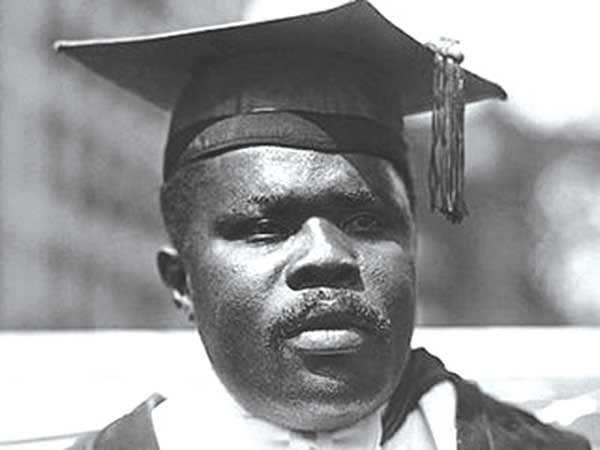 Born to parents Marcus Garvey, Sr. and Sarah Jane Richards, Garvey’s father had a strong influence on his life. His father had a large library where young Garvey spent time reading. At age fourteen, he became a printer’s apprentice and became involved in union activities, which kindled his passion for political activism.

Garvey travelled to Central and South America, then moved to England to continue his education. In 1914, he started the Universal Negro Improvement Association (UNIA) and began speaking out publicly in favour of worldwide black unity and an end to colonialism.

He moved to the United States of America in 1916 and incorporated a steamship company, the Black Star Line. It was both a business venture to facilitate trade and commerce among people of the African Diaspora and part of his larger “Back to Africa” plan for Americans of African descent, advancing the notion that African-Americans should return to Africa and establish their own black nation state.

Garvey was always a controversial figure. He favoured fiery rhetoric and elaborate uniforms, and was considered a dangerous character by some established politicians. The first International UNIA Convention adopted the Declaration of the Rights of the Negro Peoples of the World. The UNIA was infiltrated by the General Intelligence Division headed by Director J. Edgar Hoover.

Garvey was jailed in 1925 after being convicted of mail fraud, related to the sale of stock in the Black Star Line. His supporters strongly assert that the prosecution was a politically-motivated miscarriage of justice. After receiving a commuted sentence, upon his release in November 1927, Garvey was deported to Jamaica, where a large crowd greeted him at Orett’s Wharf in Kingston. A huge procession and band converged on the UNIA headquarters.

In Jamaica, Garvey continued his work for black repatriation to Africa. In 1928, he created Jamaica’s first modern political party, People’s Political Party (PPP). Garvey eventually moved back to London, England, where he died in 1940. His body was returned to Jamaica in 1964 and reinterred at a shrine in the National Heroes Park. He was conferred with the Order of National Hero and bestowed the honour of becoming Jamaica’s first National Hero.

Garveyism
“Garveyism” is the term used to describe the body of thought and organizational activities associated with Garvey. The basic organizing principle rested on the establishment of an international organization that constituted a government in exile for a revitalized African people in global dispersion from their homeland.

The goals and principles appealed mainly to segments of the working class who sought a clearer identity along racial lines as well as a means to express their rising sense of group destiny, a nationalistic phenomenon observable around the globe in the aftermath of World War I.

Rastafarianism and Garveyism
That Rastafariansim and Garveyism share many similarities is well-known among their adherents, as well as among scholars who do research on these movements. Both movements are Afrocentric and unapologetically defend the beauty and dignity of Africa and people of African ancestry.

While Garvey emphasized Africa’s social and political redemption, Rastafarians include in that agenda a spiritual dimension, which they often clothe in Judeo-Christian thought and African concepts. Both Garveyism and Rastafarianism show great respect for the Bible and attempt to distance themselves from biased, Eurocentric interpretations of scripture that contribute to the oppression of black people.

Garvey’s love for and frequent citations of passages from the Bible notwithstanding, he was less interested in giving a theological or religious interpretation to his Afrocentric political ideology than the Rastafarians have shown. Garvey and the Rastafarians, however, both read the Bible with the knowledge that Africa and Africans had been part of that recorded experience and wisdom; it is not a book that is alien to black people.

Marcus Hill, a well-known Marcus Garvey scholar in the United States, has argued that the Holy Piby and the Royal Parchment Scroll of Black Supremacy are the two books that provide “the actual interpretative basis of Rastafari ideology”.

Historically, Garveyism and Rastafarianism were both started by a person who was unknown and rather insignificant, at first, and both movements were later exported from Jamaica to other countries under the harsh economic and political conditions of the early twentieth century. Whereas Garveyism first surfaced in Jamaica during World War I, Rastafariansim came out of the depression years of the 1930s, which gave birth to the 1938 labour rebellion.

As in Garveyism, the Jamaican roots of Rastafarianism are to be found in the varied cultural, economic and political struggles of the Jamaican people in the post-Emancipation years after 1838. Both movements demonstrate a strong anti-colonial stance and are committed to an ideology of nationalism that supports political and economic independence for Blacks, although they have very different interpretations of what a black independent nation should be.

At inception, both movements were met with much hostility from the Jamaican middle class. Garveyism got its early support in Harlem before it was endorsed in Jamaica in the 1920s. Leonard Howell, who is regarded as one of the founders of the Rastafarian movement, first gained a following in the rural parish of St. Thomas and later in the parish of St. Catherine, set up a commune called Pinnacle, which was constantly under pressure from the authorities in the 1940s and 1950s.

Both Garvey and Howell were, over the course of their careers, arrested and imprisoned on charges of conspiracy, the latter in Jamaica. Today, the Rastafarians jealously guard the legacy of Marcus Garvey and have founded their Back to Africa doctrine on his teachings.

“Your allegiance shall be to your God, then to your family, race and country…God and nature first made us what we are, and then out of our own created genius we make ourselves what we want to be. Follow always that great law. Let the sky and God be our limit and Eternity our measurement.” – Marcus Garvey (1925).