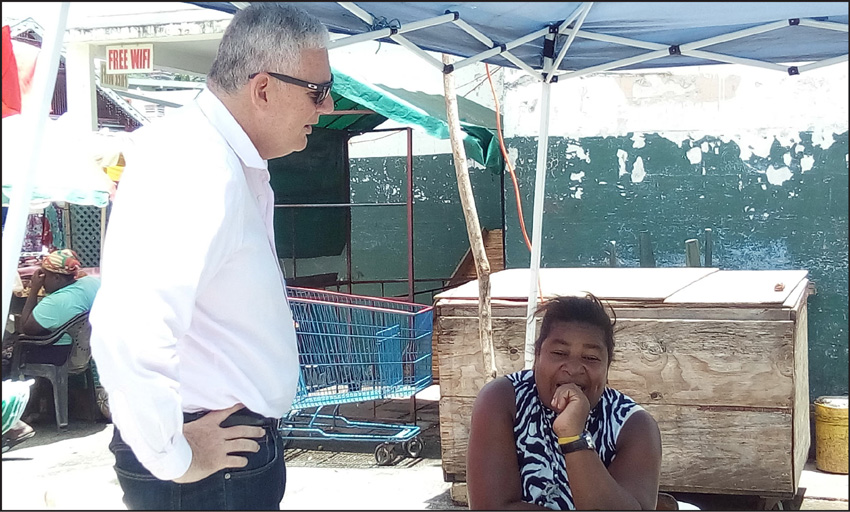 THE redevelopment of Castries will begin with the reconstruction of the Castries Market, Prime Minister Allen Chastanet said during a tour of the market last Saturday.

“Before the elections, we came here several times as a party and always thought that this place was grossly under-utilized,” Chastanet said.

Chastanet has spoken repeatedly about government’s plans for the re-development of the city. So, too, has Mayor Francis, whose plans would have to be incorporated into the government’s overall plan for the city.

“Right now we have an outside agency reviewing the plan that was done in 2008 and basically bringing it up to date,” Chastanet said after the tour.

The Prime Minister spoke of the level of frustration vendors go through daily and the need to end their frustration.

“Once and for all, we want to come in here and fix up the place. So we brought in the architect from the Ministry of Planning, an outside architect, also TEPA, the manufacturers association getting involved in terms of relooking at the entire market,” he said, adding that the goal is to have vendors sell primarily St. Lucian products.

“We should not be selling anything outside, idealistically, of the OECS. Worst case scenario from (outside) the Caribbean,” Chastanet said.

Chastanet spoke of transforming the market along the lines of successful markets across the world, mentioning the Boroughs Market in London, which has cooking stalls, areas for fresh produce, cottage industries, bars and other attractions that keep people coming to the market.

The Castries Market will not be difficult to transform since it already has in place facilities for vending fish, meat, fresh produce and other items, as noted by the Prime Minister, who said he hopes to have the market’s re-construction completed very soon.

The Castries Constituencies Council (CCC) and the Mayor are intimately involved in the market’s reconstruction, noted Chastanet, adding that TEPA would help in bringing up the standard of vending.

“The vendors are salespeople, they are not artisans, and to make sure we can supply them with appropriate products, we teach them so there is added value,” Chastanet said, noting that vendors need to explain to the tourists the history of the various products on sale.

The Prime Minister also spoke of making the market’s environment conducive for both locals and visitors.

“We got to take into consideration the comfort of the vendors and the people who are coming. We certainly want to make this a location where everybody comes…Once we have completed this project, it’s now to take this on a micro basis and spread it right across the island and so training our vendors to be the best salespersons possible,” Chastanet added.