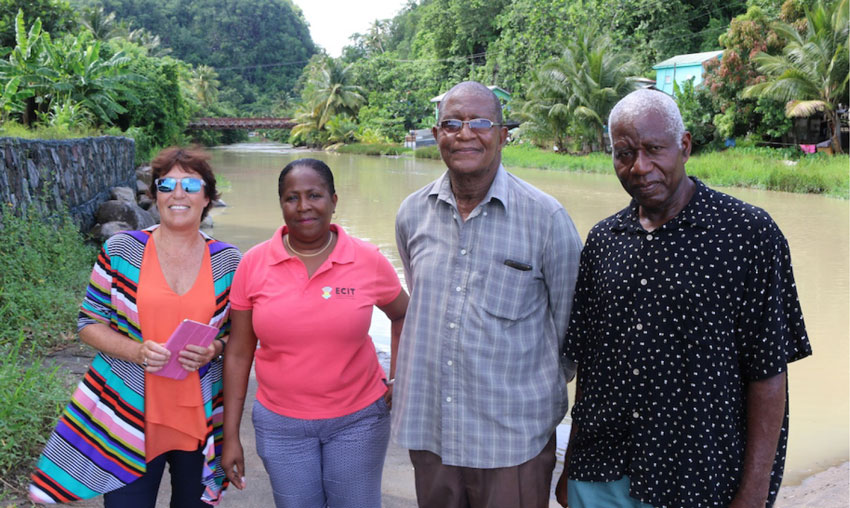 ONE year since work began on the stabilisation of the river bank in Anse La Raye, New Zealand High Commissioner, Jan Henderson, paid a visit to the site, which has seen a marked difference in flooding incidents.

The Grande Rivière, which flows through the coastal village to the sea, would frequently overflow its banks during bouts of heavy rainfall, causing severe flooding in the bordering infant school and Anse La Raye community as a whole.

Ambassador Henderson reflected on her previous visit to the village and expressed joy that her government was able to assist in the construction of a successful flood protection wall.

“I was here a year ago and the [infant] school was flooded,” she said. “The water was coming down the river and when there are big rains, it would flood this community.”

She added: “The local authorities were looking to build this flood protection wall and we were delighted to assist. I’ve come back a year later and I am just so pleased to see that it is up and that it is strong.”

Henderson was also pleased to receive hopeful reports from community members that recent rains and heavy river flows went straight out to sea and did not result in further flooding.

Chairman of the Anse la Raye Council, Stephen Griffith, said the assistance provided by the New Zealand Government and the OECS Commission was needed in the flood-prone village.

“In the past, there was a wall along the front of the school, but the river eroded the soil and undermined the wall – which eventually fell,” Griffith said. “We requested funding for a new wall to protect the school and part of the beach and we are very thankful that the government of New Zealand was able to assist.”

“With the wall being there, it has cut down — and almost stopped — the erosion of the soil and the flooding in the school yard and has offered protection,” added Griffith.

Lawrence Reeves, a resident of the Anse la Raye for over 65 years, said the flood protection wall is a step in the right direction but that additional measures need to be taken to mitigate flooding.

“The problem we have right now is that we need to desilt the rivers, particularly the Grande Rivière. This is going to be an expensive venture but it will also be critical to mitigating the flooding problem that we have,” Reeves said.

The New Zealand government, in collaboration with the OECS Commission, has assisted several OECS communities affected by the 2013 Christmas Eve Trough with disaster risk reduction interventions.

The partnership, entered into in September 2014, sought to increase the resilience of at-risk communities through the establishment of disaster preparedness facilities, rehabilitation of community infrastructure and provision of training.

A Grant Funding Arrangement (GFA) with the New Zealand Ministry of Foreign Affairs and Trade (MFAT) in the amount of US$140,000 has helped affected communities in Saint Lucia, St. Vincent and the Grenadines and Dominica under the Caribbean Community Flood Response Programme.

The OECS Commission, as recipient of the grant, was responsible for identifying and monitoring the project interventions through its Social & Sustainable Development Division.