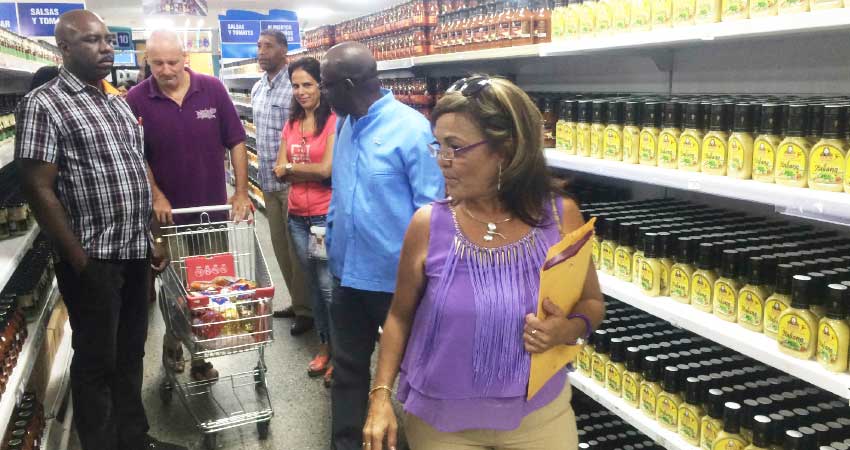 That’s how Martina Diaz, a Cuban housewife, responded after tasting the ‘Coconut & Curry’ paste, one of over a dozen different sauces, spices and other food seasonings produced by Saint Lucia’s Baron Foods, which are now available on the Cuban market.

She was one of several Cubans – women and men – who had returned to the first supermarket in Havana to make the popular Caribbean condiment brand available on this island of 11 million inhabitants.

Attracted by the superior packaging and the wide range of Baron Foods products, they had purchased their first bottles to try it out. Now they were back – and for more!

Baron Foods, Saint Lucia’s best-known and most internationally-recognized manufacturing company, has indeed made Caribbean commercial trade history in Cuba, becoming the first OECS and CARICOM company to penetrate the growing Cuban market for goods produced across the region.

With 16 branches across Cuba, TRD Caribe offers 161, 216 square metres of floor space and both sides of an entire row of its large Miramar outlet in the capital city now occupy only Baron Foods’ products, all specially-packaged and labeled, in Spanish, for the benefit of millions of Havana shoppers.

The wide range of Baron Foods products are the first from the Caribbean to hit the Cuban market in such a big way – and they were well-received by TRD shoppers in Miramar during the days preceding the official June 10 launch.

It all started when Baron Foods CEO, Ronald Ramjattan, attended the 2016 annual Havana International Trade Fair, along with other OECS, CARICOM and wider Caribbean businesses.

Less than a year later, in early May 2017, Baron Foods shipped its first container of a wide range of supplies from its main Vieux Fort, Saint Lucia plant to Havana.

Present for the launch was Saint Lucia’s Ambassador to Cuba, Dr. Charles Isaac, who noted the historicity of the event.

He pointed out that it was not only the first Saint Lucian product to hit the Cuban market, but also the first from the six island nations that comprise the Organization of Eastern Caribbean States (OECS), all of which have diplomatic ties with Cuba.

The ambassador also noted that apart from the entire Caribbean market, “Baron Foods products are also present in global markets, including Canada, Europe, Japan and the USA.”

According to Ambass-ador Isaac: “Baron Foods meets all the international standards of quality and provides excellent taste to any meal.”

Baron Foods is a Saint Lucia-based Caribbean company that has successfully achieved the highest quality standards during its three decades of existence, with its products graded annually by the International Standards Organization (ISO).

Other CARICOM products may also be available in Cuba, but not such a wide range of any brand.

He said, “The Saint Lucia-Cuba relationship has been the nest, based on solidarity between our governments and people. However, while the consolidation of this relationship continues to be strengthened with each passing year, today it has become insufficient to provide the necessary con-ditions for the sustainable development of our people.”

He continued by pointing out that, “The first important step at broadening our relationship to trade is, therefore, very significant.”

“It represents,” he said, “the beginning of a business process that will be beneficial for Cuban, Saint Lucian and OECS enterprises.”

Judging on the basis of sales at the Miramar outlet over just two days ahead of the formal launching ceremony, the ambassador said he has positive expectations for the future.

According to Ambassador Isaac, “From early responses noted by the TRD officials, I am confident that this product, in its many forms, will be accepted, not just by Cubans, but also by tourists visiting Cuba, diplomats and the thousands of international students in Havana and across Cuba.”

He, however, sees the wide range of the Baron Foods products opening the way for an even brighter future for Saint Lucia and Cuba.

The envoy says he can see the new Baron Foods business relationship between Castries and Havana, “not only growing and getting better each day, but also opening the way for several other Saint Lucian companies also ready to advance the process of accessing the Cuban market, or to establish joint venture manufacturing enterprises.”

But while Ambassador Isaac is ready to accommodate other Saint Lucian companies, he also feels Saint Lucia can enhance its trade relationship even more by sharing the experiences of other CARICOM countries, especially Trinidad & Tobago.

He explained that, “Trinidad & Tobago, which is the region’s biggest manufacturer and exporter, has an embassy in Havana, but it has also buttressed it with the recent establishment of a Trade Office in Havana.”

“This,” he adds, “underlines the importance of the value of trade in bilateral relations and ties between states, and what a Trade Office does is enhances the ability of each country with ties with Cuba to take advantage of accessing the emerging Cuban market.”

Meanwhile, TRD Caribe’s Miramar branch happens to be the first to launch the Saint Lucian product – and in an area that’s also home to the diplomatic corps, represented by over 130 embassies, consulates and other diplomatic missions accredited to Cuba.

TRD officials, pleased with the initial responses, say it’s just a matter of time before the Baron Foods products hit the shelves in their other supermarkets in other provinces outside Havana.