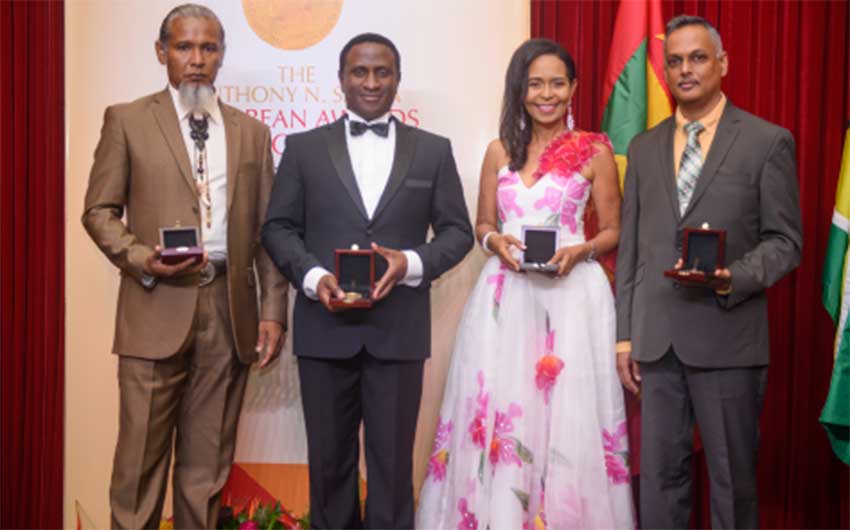 THE OECS region has received its second Laureate for Entrepreneurship from The ANSA McAl Foundation.

According to the award citation, Nyack Compton was bestowed this prestigious award for “her achievement in transforming an institution of oppression, the Plantation, into a human-centered, economically-viable enterprise to the benefit of her local and national communities.”

They noted that she abandoned a possibly lucrative legal career in the United States and took personal risks and entered into agriculture, a field far less popular. They considered that the symbolic and real world implications of Belmont Estate can guide the region.

Nyack Compton impressed the Regional Eminent Persons Panel, the selecting committee via her foresight, imagination, intelligence, persistence, innovativeness and concern for people and sustainability, which are essential for Caribbean development. They stated that because of her qualities of entrepreneurship, sentience and humanity, Nyack Compton has been found “an Entrepreneur of the first rank, worthy of the accolade of Laureate.”

Accepting the award at the ceremony held at the Marriot Hotel in Georgetown, Guyana, Nyack Compton started by commenting that the ceremony reminded her of the Oscars and that she was accepting it as Grenada’s Oscar! She congratulated the ANSA McAl Foundation for making the awards non-gender specific.

“This allows for women to be recognised and celebrated in traditionally male–dominated areas. A person’s gender should neither be a hindrance nor an advantage – great work is rewarded regardless of gender,” she said.

She expressed special thanks to her country and government for providing a good business climate for entrepreneurs.

“I am also deeply grateful that I am from a country that provided an enabling environment for me as a woman to establish and grow my business and for the Grenadian government’s strong policy position towards supporting business development in the areas of agri-business, sustainable tourism, and value- added manufacturing.”

As an OECS candidate, with St. Vincent origins and a St. Lucian father, she also paid homage to St. Lucia for its positive influences in her life and she recognized the OECS for its work in sustainable development in the region.

Nyack Compton is the daughter of the late Augustus Compton, a regional diplomat and Caribbean integrationist who served as Executive Secretary of West Indies Associated States and Deputy Director of the Organization of Eastern Caribbean States.

Reflecting on her journey in developing Belmont Estate into the agri-tourism business it is today, Nyack Compton said that on many occasions she had to step outside of her comfort zone to define her own route to her destination and that sometimes success was only possible because of her dogged determination.

“This is not a journey for the faint at heart. It requires one to take risks, overcome disasters, find solutions, and to recognize that somewhere in the midst of the successes and failures is reality. I have learned, as Kipling says in his poem “If”, ‘to meet with Triumph and Disaster, and treat those two imposters just the same’,” the Belmont Estate Manager said.

She urged more women and young people to pursue careers in agribusiness and agri-tourism.

“In this age of technology, the Internet has given us full access to information. We need to harness the opportunities that we have to ensure food security for the region and lessen our food import bill. Strong regional policies that support private sector development in sustainable agriculture and tourism initiatives in the Caribbean can drive manufacturing, food production, export, visitor arrivals and make a positive difference in our economies. My personal dream for my island is that we optimize our destination branding — Pure Grenada — The Spice of the Caribbean — by committing to organic farming by ensuring clean, healthy, safe foods, thus improving the health of our people and protecting our environment at the same time.”

The 2017 Laureate credits her achievement to the unflinching support of her mum and dad and the encouragement of her staff, family and friends as well as the stakeholders, partners and customers of Belmont Estate. She expressed gratitude to her staff for their sacrifices, for believing in her and for standing with her through hurricanes and devastating personal tragedies. She also gave special thanks to Dr. Beverley Steele, who nominated her for the award.

“I stand here today because of you. Thank you for believing in me, thank you for persisting even when I tried to bow out. Thank you for your mentorship and encouragement. I am committed to inspiring others as you have inspired me,” Nyack Compton said.

The Anthony N Sabga Caribbean Awards for Excellence (ANSCAFE), which began in 2005, is said to be the English-speaking Caribbean’s leading recognition programme in Arts, Sciences, and Public and Civic Work and Entrepreneurship.

The 2015 recipient of the first entrepreneurship award was Vincentian, Herbert Samuel. The other 2017 Laureates are: Sculptor, Winslow Craig, and Dr. Christopher ArifBulkan, a lawyer and senior lecturer at the Faculty of Law, UWI St. Augustine — who are both from Guyana — and Trinidadian music conductor and educator Kwamé Ryan.

In congratulating them, Nyack Compton challenged them to bear high the torch of Dr. Anthony Sabga, who recently passed away.

“His passing provides us with a greater opportunity to honour his legacy of passion, philanthropy, excellence and service,” she added.

Nyack Compton also reflected on her meeting with Dr.Sabga only two months ago and lamented the loss of such an extraordinary leader, entrepreneur and philanthropist. She expressed how moved she was by his humility and simplicity and said there are many lessons to be learned from his life story.