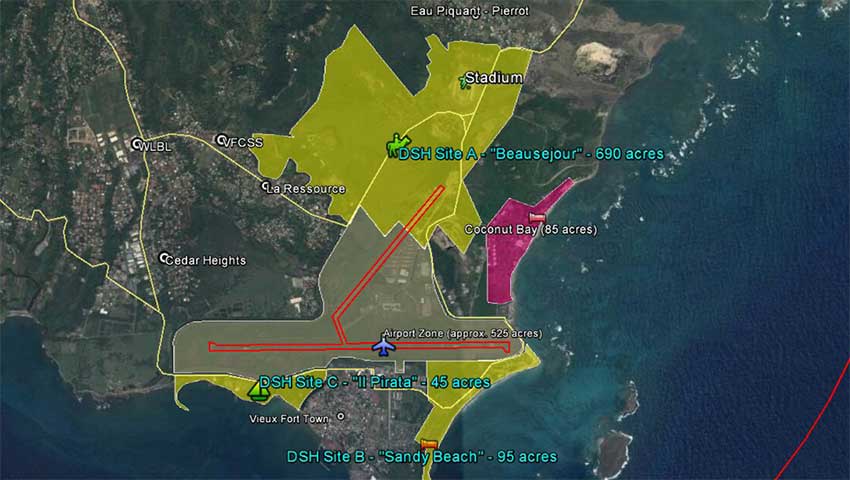 I have watched and listened to the various utterances and activities relative to the planned developments in the southern area. I have also contended before that succeeding administrations continuously laud the developmental suitability and economic value that is reposed there, but some have failed to pursue in a significant way the opportunities presented in order to further the lot of the area and advance the social well-being of the people.

Upon reflection, one must agree that the developmental strides made in Vieux Fort have all been championed by a government of the United Workers Party. The Vieux Fort Senior and Junior Secondary schools, the Halcyon Days Hotel, the Hewanorra International Airport, Port Vieux Fort development, St. Jude Hospital, the Industrial Estate along with land and housing developments in Black Bay, La Tourney, La Ressource, Beane Field and the St. Jude High Road, to point a few. While the players have been changed, the vision of those who went before must continue to be a present-day mission.

Battle lines have been drawn and some of us sit on distant opposing poles creating greater and wider divides among an already cynical people. Those purporting to be fighting the cause of the deprived, disadvantaged or those described as spontaneous settlers and those who believe strongly that the ecosystem (plants and wildlife) should remain untouched, may be unyielding in their quest to preserve, uphold and protect their beliefs.

On the other hand, the architects of both physical and human development are strident in their path to create employment and to ensure the economic and social advancement of a people, remain defiant, focus and steadfast. I, therefore ask: “Should there not be room for compromise?”

Too many have remained entrenched in, or blinded by, their personal agendas and selfish pursuits of power and aggrandizement, thereby losing sight of the whole picture and the countless opportunities that may be on the horizon. Others are unforgiving simply because they have been marginalized or trampled upon by those who hold the reigns and, therefore, could be deliberate in their attempts to reverse or obstruct progress.

Some are mortally afraid of journeying into the unknown. The fear of change abounds and negativity constantly looms. Where is our exploratory courage? Where is our faith? Where is our sense of community? Where is our desire for progress? I dare say that a divisive and a stand-offish disposition will not cut it.

I was encouraged by the article in The Voice of St. Lucia newspaper of April 27, 2017, penned by Dr. Edsel Edmunds, a consummate environmentalist himself, in which he wrote, “I am of the view that it is possible to link human and economic development with the preservation of indigenous species”. A sound and balanced voice! I exclaimed. I note, with a sense of caution, that while the expressed challenges and objections may have been attended to, others will evolve simply because one opposes the thought of a comprehensive development in the south which would impact and transform lives and landscape.

There are those, too, who are wary of the devil in the details of the agreements and the likelihood of St. Lucia being left to hold the hairy tail. Yes! That patois saying, “Se’ sakitjenbe’ latje’ pwele’ kisavsi’ li cho”. St. Lucia, you will agree, has been left to hold on to too many of those “hot hairy tails” in the recent past. I need not dilate.

We should never remain as distant as the poles and expect, as a people and community, to make things work. We must not only push or peddle the side effects and omit to expound on the beneficial aspects of any undertaking. We cannot claim to be fighting the cause of the marginalized and doing nothing of consequence to remove them from any deprived or squalid living conditions.

Many of us who lived or tread the marshy grounds of the Bacardere and the Mangue, or wallowed in the muddy waters of the old Vieux Fort river, the La’bushswee and Coco Dan, may have found ourselves today, through dint of hard work, at the foothills of Belvedere, Pierrot, Moule-a-Chique, Cedar Heights, La Tourney, Black Bay and other areas. A genuine feeling of social progress must come over you, no doubt. This feeling should not only be for a selected few.

I am in no position to doubt the genuine feelings of some of the protagonists, but I am concerned that what I see emerging is the stirring up of anger, the promotion of doubt and confusion among some vulnerable and unsuspecting individuals. I will not dispute that the protestations we have seen are without merit, but I also see that it has taken on quite overtly a political dimension, thereby defeating the sense of non-partisanship that was proclaimed earlier. The puppet masters are at work and many are dancing to their shrouded music. Too many of us have been hood-winked by hatred and an underlying malice which have permeated our societies at all levels.

Can we not find common ground or the significant positives that we agree on? Can we not muster courage or the strength of character and will to sit and dialogue on those that are seemingly questionable? Oh, no! We’ll take it to the streets with our swords in hand and our fiery tongues of mischief instead. It is my hope that the doors for honest and worthwhile dialogue can be and remain open and that our swords shall be transformed into ploughshares in order to further the interests of a people and country.

It is past high time for the social and economic development of the south to take centre-stage. It is past time for the southern region to advance and increase its contribution to the social and economic welfare of the nation. This region, it has been said, is endowed with a stock of natural attributes/assets, which once effectively used and managed, can change the fortunes of a people and a community that have been, for the better part, in a state of flux. We are overdue for an economic and social overhaul.

Therefore, good, intelligent debate is healthy for the desired outcome in our growth and development. To remain stiff-necked, recalcitrant or an anti-so-and-so at all cost, cannot be in the best interest of those we pretend or seek to represent. I have always been advised that one does not always have to be at the helm in order to make a meaningful contribution to the success of a team.

The ranting of the naysayers and the counter-attack of the proponents will always be with us, but we must be thoughtful, yeah — considerate in our quest to effect desirable changes. We must be committed to what is best for and beneficial to all our people so that, “St. Lucia can once again be an example of a success story in the economic, social, environmental and physical development sphere.”

The Vieux Fort region as a whole, though not at all cost, is deserving of special developmental attention. We who are really and genuinely concerned must, therefore, come forward with not only our criticisms but also with alternative solutions and recommendations. Vieux Fort desperately needs to move forward and upward and we all should have a positive role to play in this. It’s past time to remove the hostility or any political savagery which may exist and inject a surfeit portion of civility in the process. Douvan! Vieux Fort, Douvan!