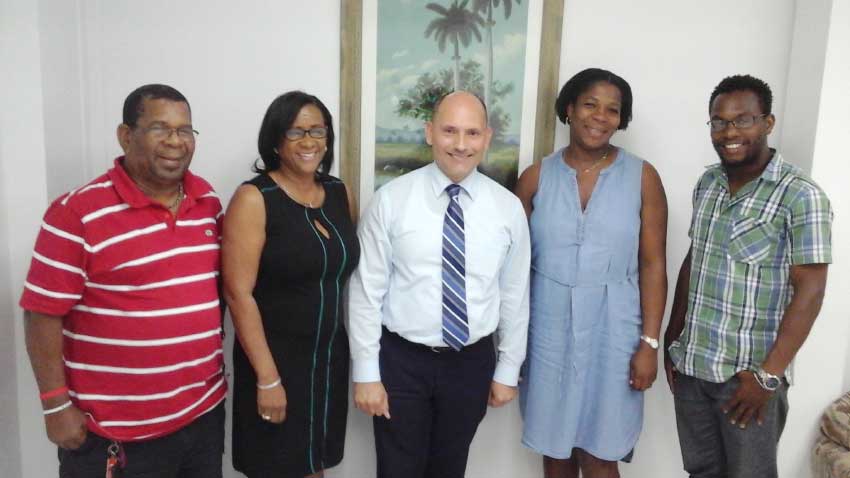 PRESS RELEASE – THE newly-elected Executive Committee of the Humanistic Solidarity Association (Saint Lucia-Cuba) has paid a courtesy call on the Ambassador of the Republic of Cuba, Jorge Soberon, at the Cuban Embassy at Rodney Bay.

The main order of business was to congratulate and welcome to office the HAS’s newly-elected executive and discuss a plan of activities for the year 2017-2018.

Among the matters discussed was an activity to mark the celebration of the First Anniversary (November 2017) of the death of former Cuban President and Commander-in-Chief, Fidel Castro Rúz.

The association is of the view that it is important to highlight the works of Fidel Castro as a model President who made an extremely significant impact on a global scale in numerous areas.

He was a giant among men in matters of regional and international politics, with particular emphasis on the need for Third World populations and their governments to liberate themselves from the yoke of colonialism, imperialism, and unbridled and inhumane capitalism.

The association continues to pursue the essential tenet of its mandate, encapsulated in our struggle “To engender cordial and open relations between the people of Saint Lucia and Cuba; to disseminate information about Cuba; and to explore the development of cultural exchanges between the two countries.”

The new Executive Committee of the HSA will be pursuing its mandate with added enthusiasm during 2017 under the capable and experienced leadership of Sister Marlene Alexander as the Association boldly steps into a brand new era of its nearly 12-year existence.

Meanwhile, Executive Members have since written to the Cuban Ambassador to express deep appreciation for the opportunity to meet him and for the warm welcome they received at the embassy.

The meeting was very fruitful and allowed the executive members to discuss priority activities of mutual interest in collaboration with the embassy.

The association looks forward to our continued collaboration and to future meetings.