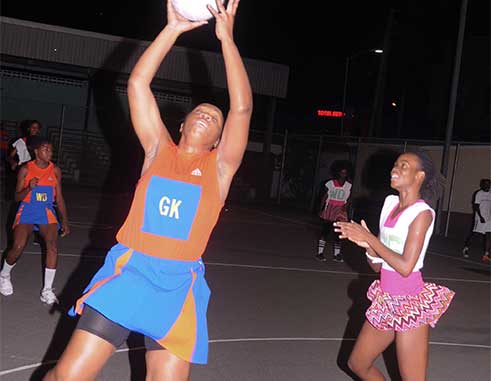 FOLLOWING on the heels of their male counterparts advancing to the semifinal round of the Super League Football Tournament 24 hours earlier, the senior Canaries netball team inched closer to retaining their Inter-District Netball Championship when they narrowly defeated a rejuvenated Castries team 29-26 on Monday evening at the Vigie Multi-Purpose Sports Complex.

The first quarter was evenly matched as both teams appeared cautious and tentative in their approaches. It was quite apparent that Canaries were not on top of their game while Castries were slowly getting into their own. As a result, it was Castries who ended the quarter with a one goal advantage at 6-5.

In the second quarter, a more purposeful and determined Canaries team upped their game a few notches. Though they were able to get the ball into the shooting circle more often than their opponents, they faltered in that area. Nevertheless, they were able to outscore Castries to end the half ahead on 13-10.

The third quarter began in earnest as both teams sought to take control of the game. It was during this period that the Castries team faltered and lost their earlier momentum.

Canaries took advantage of the situation to gain further advantage as they outscored Castries 10-8. The quarter ended 23-18 in Canaries’ favour.

The final quarter saw a more spirited Castries team in determination mode as they sought to spoil the party. By that stage, they had too much ground to make up for and although they pulled out all the stops to outscore Canaries eight goals to six, the die was already cast as Canaries held on valiantly to win the game.

Although Castries were stubborn on defense, they were guilty of committing too many unforced errors which Canaries capitalized on.

Leading the way for Canaries were goal shoot Vanancia Mitchel, who connected on 16 from 36 attempts and goal attack Megan Nestor, who netted 13 from 24 attempts.