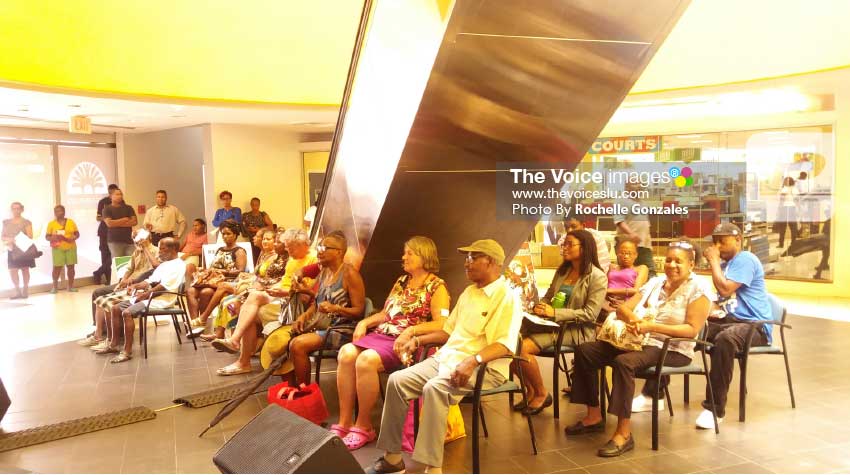 MUSIC filled the air in William Peter Boulevard for the latter part of this week as Blue Coral Mall held its third annual Blue Coral Jazz.

The event kicked off on Wednesday and featured top-notch local artistes, including Steel Pan Pro Aimran Simmons and smooth crooner Shayne Ross, who opened the session on Wednesday afternoon.

The event was held on the ground floor of the mall and attracted students and other music lovers – including tourists – who stopped to listen to the rich sounds of some of St. Lucia’s most talented artistes.

Simmons kept the crowd entertained with his vast range of songs spanning many genres, including rock, R&B and dancehall, showing the true versatility of the steel pan. He said he was extremely excited to be a part of the festival. However, he noted that had more advertising for the event done beforehand, there might have been a greater turnout.

“I don’t know whether people were informed enough because, you know, everyone is just coming around to do their shopping and stuff. But those who passed and saw what was going on stopped for a while. So it was good,” he said.

Ross belted his heart out with his silky smooth voice that stopped listeners in their tracks (namely women) as he sang, including his popular hit, “I’m In Love With You”.

He also managed to get the small crowd moving by personal interaction where they danced away as he hit all the right notes.

This was the only jazz event that Ross had not previously taken part in. Prior to his set, he said he was looking forward to the performance as it was the perfect mellow setting.

After his performance, he said: “The crowd was a bit small but it was good. Hopefully, it will pick up as the days go and we’ll see more people. Of course, with more people, there is more energy and more vibe in the audience.”

One shopper expressed her disappointment with the lack of support for the artistes and the event in general, saying it was a sad affair when St. Lucians chose to pay hundreds to support foreign acts while completely ignoring the gold that home has to offer.

The shopper, who identified herself as Anne, said: “I find our St. Lucian people, although they are of Caribbean heritage, don’t appreciate the jazz and especially the steel pan. Steel pan is our heritage and they don’t appreciate it. This guy Aimran is in the Blue Coral Mall and he is giving a top-notch performance — jazz, blues, rock ‘n roll, you name it. Anything you want, he can play. But our St. Lucian people, the applause is not too good, and it’s all for free…for free! But then they will go and pay all that money for Vanessa Williams. Can you imagine that? What a shame on our Caribbean people!”

Allison Pascal, Manager of Blue Coral, said that although the crowd was smaller than expected, there was a good vibe to the event.

“Blue Coral Jazz is special to people in the centre of the city. You may see people just walking through and not stopping for a very long time. But lots of people get to enjoy 15-20 minutes of it as they go about their shopping. So you can see people on all the levels enjoying the music as they shop and it’s a real experience.”

The events ran from 12:00 noon from Monday to Friday and featured two acts during an hour-long session per day. Other acts included Yannick James, 6 Miles, Visions and Dynamix.