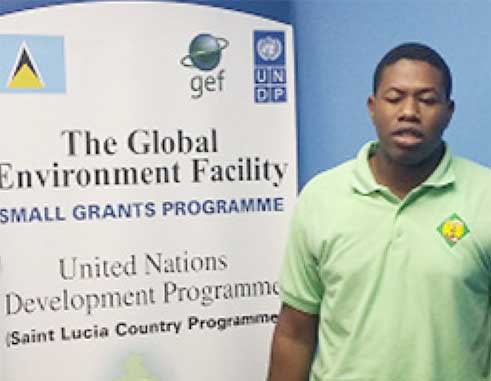 THE Global Environment Facility Small Grants Programme which is implemented by the United Nations Development Programme (GEF SGP UNDP), has announced the selection of a Saint Lucian project for presentation at the Earth Optimism Summit in Washington D.C. next month.

This success is based on the hard work of 24 year old JohananDujon of Algas Organics, who started experimentation in his parents’ basement. Dujon is participating in a project partnership that includes the Saint Lucia Fisher Folk Cooperative Society Ltd (SLFFCSL), the GEF SGP UNDP and the Inter American Institute for Cooperation on Agriculture (IICA).

The project is titled “The Removal and Utilization of Sargassum from the East Coast of Saint Lucia to create organic compost for the farming industry” and has a total budget of US$100,397. Of that total, GEF SGP UNDP is contributing US$50,000, with cash co-funding of US$25,000 from the SLFFCSL, and In-kind contributions from the Government of Saint Lucia (GOSL), IICA and the SLFFCSL of US$25,397.

This project is still being implemented and will soon give to Saint Lucia its first bio-fertiliser manufacturing plant which will be located at Bosque d’or in Dennery.

In early February, this year, the GEF SGP UNDP and the grantee submitted the project in a competition to select projects which had strong environmental, economic and social components. The Smithsonian Institute was in search of projects which could be promoted globally as successes in a period when environmental quality indicators have taken a downward trend and are accelerating.

According to the Smithsonian Institute, “the global conservation movement has reached a turning point. We have documented the fast pace of habitat loss, the growing number of endangered and extinct species, and the increasing speed of global climate change. Yet while the seriousness of these threats cannot be denied, there are a growing number of examples of improvements in the health of species and ecosystems, along with benefits to human well-being, thanks to our conservation actions. Earth Optimism is a global initiative that celebrates a change in focus from problem to solution, from a sense of loss to one of hope, in the dialogue about conservation and sustainability”.

The project was judged to have met the criteria of innovativeness and in the letter of notification to Mr. Dujon the organizers noted the following: “We have searched for stellar examples of compelling stories and story tellers, and your success with transforming invasive seaweed into organic compost for agriculture stood out. We hope you will join us and share your story at the Earth Optimism Summit”.

Dujon will be fully funded by the Smithsonian Institute to attend the Earth Optimism Summit in Washington D.C. from April 21 to 23, during which time he will make a presentation on the project. According to the organisers, participants will join over “. . . 1000 conservation practitioners, pioneering scientists from varied fields, leaders in industry, philanthropists and artists and this event will be complemented by public events throughout the city and many partner events across the world. Presentations will also be streamed live to a global audience”.

Dujon will therefore be preparing to deliver one of the most important presentations in his life as a young Saint Lucian innovator and entrepreneur, but also as an unofficial ambassador who is presenting Saint Lucia to the world.

The GEF SGP UNDP compliments Dujon and the government and people of Saint Lucia on this achievement, and also all the partners who have contributed their human and capital resources in making this project very successful to date. They look forward to the opening of the bio-fertilizer factory which will be sometime before June 2017.