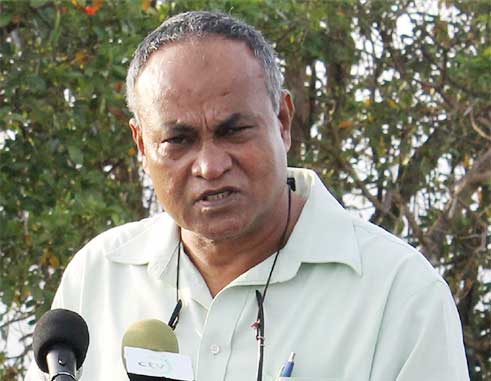 DIRECTOR of St. Lucia National Trust (SLNT), BishnuTulsie, says he is not averse to an entity facilitating a meeting between his organization and the government to iron out the tensions between them.

“We welcome it. If an entity would come up and facilitate such a meeting, we would welcome that,” Tulsie told The VOICE yesterday.

The Trust has met twice with the government — once over the DSH project and another over the dolphinarium proposal — but has yet to meet with government to discuss the work it does in conserving and preserving the country’s heritage and patrimony, Tulsie said.

The current controversy between the government and the Trust has deteriorated whatever good relationship the two bodies had in the past, although Prime Minister Allen Chastanet has said he was not vexed with the organization. However, certain revelations made by Dr.Vasantha Chase, Chairperson of the Trust, earlier this week do not validate the Prime Minister’s statement.

Much of the controversy between the two bodies has been played out in the media, something Tulsie wants to end.

“I think we have to stop speaking to each other over the media. This must stop,” Tulsie said.

Reports of Tulsie being asked to be sacked as Director of the Trust were attributed to Prime Minister Chastanet by Dr. Chase earlier this week, along with other issues that only served to heighten the tension between the two parties.

Defunding the Trust of its annual subvention of $700,000 for this financial year blew the lid off an already tense relationship between the two sides, one which was simmering due to the positions they had adopted in respect of the proposed dolphin park to be established at the Pigeon Island National Landmark.

With the Trust dead-set against the dolphinarium and the government equally determined to establish the project, a confrontation between the two was inevitable, one which was further compounded by government’s withholding of the subvention.

“It’s difficult for us to understand the rationale for this (subvention removal),” Tulsie said Thursday on the radio talk show, “News Spin”.

According to him, an organization like the St. Lucia National Trust, which does work in the interest of the public and the State, should merit some support from the government.

“This is the first time the organization is not enjoying the support of the State. I hope this is not a reflection of the value government places on heritage conservation,” Tulsie said.

Sylvester Clauzel, former Chairman of the Trust, who appeared on the radio talk show with Tulsie, is looking forward to a change of heart from the government but this, he said, may not be possible given certain statements made by the Prime Minister.

With regards to the subvention, he said that although it accounts for only 20 percent of the Trust’s revenue, it is still needed “because the reality is that when you are doing conservation work, certain elements do not have revenue generating capacity.”

Clauzel called for people to leave politics out of what is happening between the Trust and government and wants the opposition to government’s action to be bipartisan.

“People should avoid the connecting of political operatives to that particular opposition. The National Trust, for all intents and purposes, has maintained a very neutral position and have never been widely accused of being connected to any one political party,” Clauzel said.

Tulsie, he said, had done a lot in trying to keep the independence of the organization which has protocols to be followed in that regard.(M.G.)