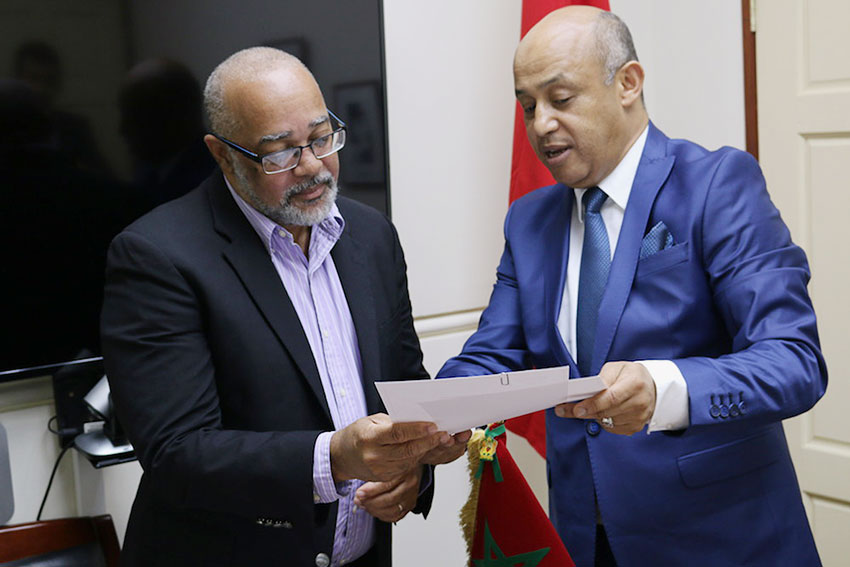 THE Ambassador of the Kingdom of Morocco to the Organisation of Eastern Caribbean States (OECS), AbderrahimKadmiri, presented his credentials to the Director General of the OECS, Dr.Didacus Jules last Friday at a ceremony held at the OECS Commission at Morne Fortune, Castries. The Ambassador was accompanied by senior diplomatic officials from the Embassy of Morocco.

In his opening remarks, Dr. Jules welcomed and congratulated the Ambassador on his appointment, noting that “Morocco is a good and old friend of the OECS”.

The Director General said that: “The accreditation of Your Excellency today is quite opportune. It is happening at a time when the Organisation has just been mandated by the Authority of Heads of Government to examine concrete ways of coordinating and deepening its diplomatic and economic relations, particularly with its southern friends and neighbours. In that spirit, the Commission welcomes your accreditation to the OECS and looks forward to working in close collaboration with Morocco in mutual areas of development.”

The Ambassador said cooperation between his country and the OECS should prove beneficial to both sides. He explained that the focus of Morocco’s policy is towards south-south cooperation and pointed to the long history of assistance to the region in the fields of education and agriculture.

During the meeting, the Director General and the Ambassador exchanged views on a broad range of development cooperation issues. Both sides agreed to commence in-depth discussions in the immediate future, in order to pursue the common objective of deepening relations.

The Embassy of the Kingdom of Morocco was established in Saint Lucia in March 2014 and covers all OECS Member States, as well as Barbados, Jamaica, Trinidad and Tobago, and the Bahamas.